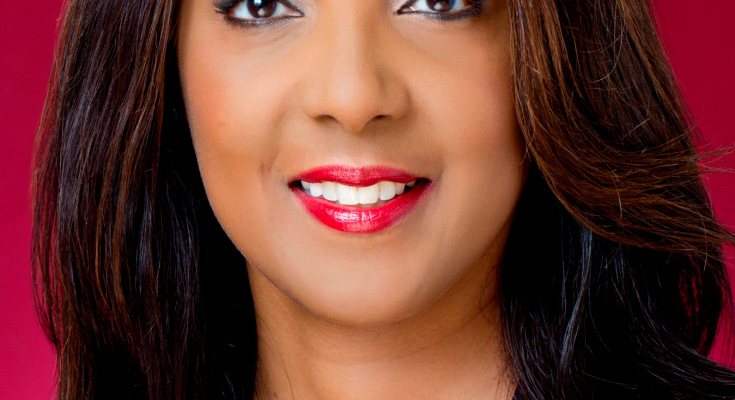 Michelle Bernard is an American journalist, political analyst, lawyer, author, and President and CEO of the Bernard Center For Women, Politics & Public Policy.

She stands a height of five feet ten inches tall.

Michelle is of American nationality.

She graduated from Howard University with a B.A. in philosophy and a minor in political science. She has a Juris Doctor degree from Georgetown University Law Center.

Her family heritage is Jamaican American. Saying in an interview with Bill Steigerwald, “My parents are American citizens, but they come from Jamaica.

She is the daughter of Dr. Milton Bernard and Nesta Bernard. Her father was the US’s most respected oral and maxillofacial surgeons, and her mother was the vice-president of development and alumni relations at Howard University.

She has two sisters and a brother.

Bernard was married to CNN correspondent Joe Johns until the couple divorced in 2008. She remarried in 2014 and lives in Potomac, Maryland with her husband Keith Bell.

She has two children from her previous marriage with Joe Johns, Avery and Lagon Bernard.

An attorney by training, she is the president & CEO of the Bernard Center for Women, Politics & Public Policy where she concentrates on domestic and foreign policy matters.

Additionally, she is a political and policy analyst, media commentator, social critic, author, columnist, and public speaker. She provides commentary on varied topics.

She is a contributor to The Huffington Post, and a columnist for Roll Call and U.S. News & World Report.

In 2009, she co-created and hosted MSNBC’s education reform television special, “About Our Children.”

Michelle is a member of the journalism advisory board of The Seventy Four. Additionally, she is a member of the International Women’s Forum of Washington, D.C. and served as its Leadership Foundation Liaison from 2013 to 2015. She is a former member of the Board of Trustees of Hampton University. As a practicing lawyer, she was a partner at the District of Columbia’s then, Patton Boggs LLP.

In March 2016, Michelle was awarded a distinguished alumni achievement award from Howard University for outstanding post-graduate achievement in the fields of media, journalism and public policy.

In 2015, she was awarded the Anvil of Freedom Award for journalism and democracy by the University of Denver’s Edward W. and Charlotte A. Estlow International Center for Journalism and New Media.

Later that year, the Carrie Chapman Catt Center for Women and Politics at Iowa State University announced that she was being honored on the University’s Plaza of Heroines which honors women role models who have made an impact on their families, communities and society.

She is the author of;

Additionally, she is the author of numerous opinion blog posts that appeared in The Washington Post’s “She The People” blog from its inception in 2012 as a platform for exploring the intersection of women and politics and culture, through its farewell in early January 2015.