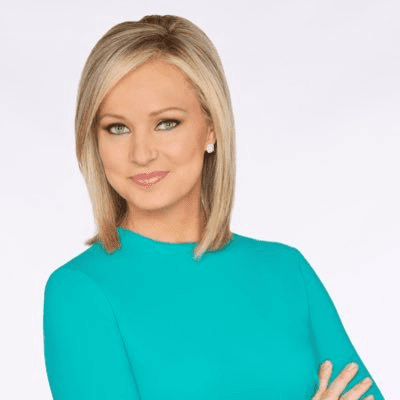 Sandra Smith is an American media personality serving as co-host of America Reports along with John Roberts on Fox News Channel. She previously co-hosted America’s Newsroom alongside Ed Henry until he was terminated in July 2020 after he was accused of sexual misconduct.

Sandra stands at a height of 5 feet 8 inches tall.

Sandra attended Wheaton Warrenville South High School graduating  in 1998. While there she was an athlete who earned three letters in cross country and two letters in track at Wheaton Warrenville South. She was the cross country team captain as a senior. Smith was an Illinois High School Association state qualifier, earned All-DuPage Valley Conference honors, and was an Academic All-Conference selection.

She later joined Illinois State University in Bloomington-Normal before transferring to Louisiana State University (LSU) in Baton Rouge for the 2002 school year graduating with a major in Business with a minor in Speech.

Sandra has not revealed the name of her parents but she shares their photos on her Instagram page. Her father is a veteran and worked as a floor trader on the Chicago Mercantile Exchange.

Smith has five siblings; four brothers and a sister known as Caroline.  She is the youngest while her sister is the oldest and share an age gap of 14 years.

Sandra is married to John Connelly, a financial television commentator for Fox News and former director of product marketing for CME Group. The couple got married on May 1, 2010. The couple has an age difference of 12 years but Sandra told the Chicago Tribune that the age difference doesn’t bother them.

The couple first met while they were working at Terra Nova Trading, LLC. At the time Sandra worked as a sales trader. Sandra told The Chicago Tribune that her first two weeks on the job were John’s last two. He was leaving to start his own business.

“After a few days on the job. I was eating my lunch on the trade desk and looked up at the TV screen and noticed there was something very familiar about the guy providing commentary on the financial television program. He had on a bow tie. I turned to look at John’s desk — empty. I looked back up and asked the guys on the desk if that was him.” Sandra said.

After John returned to the office Sandra asked him about it and he invited her to try taping a TV spot at First Business News at CME Group.

He coached her through it and after he left she was asked to take over his role of providing the firm’s TV commentary.

The couple soon began dating. A year and a half later Sandra was offered a job with Bloomberg Television in New York which saw the beginning of their long distance relationship.

“I was on a plane almost every Friday night. Flight delays, snowy weather, tight time schedules made it very challenging. But not once did John complain. He has always been so supportive of my career and goals. He fell in love with my family, and I his. We’d see friends. We’d go to church on Sunday. I was still a lector at Holy Name. There was a lot to squeeze in.”

Sandra and her husband share two kids; a daughter known as Cora Belle Connelly born in 2013, and a son, Connelly Junior born in 2015.

Sandra joined FOX News Channel’ in October 2007 as a reporter for FOX Business Network (FBN). She serves as a co-anchor of ‘America Reports with John Roberts & Sandra Smith’. On the show they are joined by newsmakers and experts to discuss the latest afternoon headlines and issues of the day.

Throughout her tenure, Smith has appeared across both FNC and FBN daytime and primetime programs, as well as frequently filled in as guest anchor on The Story with Martha MacCallum (weekdays 7PM/ET).  She co-anchored FNC’s special coverage of the memorial service honoring civil rights icon Rep. John Lewis (D-GA) alongside Harris Faulkner and Trace Gallagher.

In November 2015, alongside former FBN anchor Trish Regan, she moderated the FOX Business Network’s inaugural Republican presidential primary debate, making history as the first dual-female team to host a debate. The event, which featured candidates earning less than 2.5 percent, delivered 4.7 million total viewers and 866,000 in the key 25-54 demo, making it one of FBN’s highest rated programs.

Prior to joining FBN, she worked at Bloomberg Television as an on-air reporter. In that role, she covered U.S. equities and derivative markets and contributed to breaking news and analysis.

Before joining the media she worked as the Director of Institutional Sales and Trading at Terra Nova Institutional where she handled investment management and hedge fund accounts. She also assisted in the development of program trading models for existing and prospective clients. Prior to this, she was a trader at Hermitage Capital, where she executed U.S. equities and options orders, conducted portfolio analysis, prepared commission reports and serviced clients.

She began her career as a research associate at Aegis Capital. There, she assisted in the research and analysis of retail stocks, prepared weekly stock newsletters to clients and identified investment opportunities.