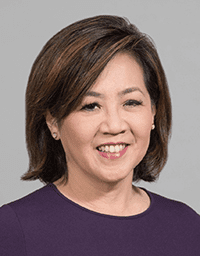 Joie Chen is an American television journalist. She was the anchor of Al Jazeera America’s flagship evening news show America Tonight, which was launched in August 2013 until the channel closed on April 12, 2016. Chen has been a Washington-based correspondent for CBS News, reporting from the White House, Capitol Hill. She also has been an anchor at CNN and CNN International, covering world affairs and domestic issues, and she reported for USA Today on TV.

She stands a height of five feet five inches tall.

Chen attended pre-school through high school in Evanston. She participated in the Medill-Northwestern Journalism Institute for high school students, also known as Medill cherubs. She went on to receive both her bachelor and master’s degrees in journalism from Medill School of Journalism at Northwestern University.

She is a member of the Medill Board of Advisors, and also serves on the Accrediting Council on Education in Journalism and Mass Communications, as the representative from the Asian American Journalists Association.

Her father, Chiadao Chen, was emeritus professor in biochemistry at Northwestern’s medical school. Information regarding her mother is currently not available.

Joie is currently married to Michael and they live in Bethesda, Maryland.

She has a son, Evan.

In the summer of 2013, Joie joined Al Jazeera America to become sole anchor of their flagship news program, America Tonight. The show went live on 20 August 2013. Presenting long form TV nightly news, she has covered a range of human interest stories in the United States, and domestic and international news stories.

Prior to that, Chen left daily journalism to become Executive Vice President at Branded News Worldwide, in 2008. She was responsible for helping to develop news and programming models for clients, building and staffing newsrooms, and creating new lines of business.

From 2002 until 2008, she worked as a White House and Capitol Hill correspondent at CBS News in Washington D.C. Chen contributed regularly to the network’s long-form program CBS Sunday Morning. She anchored the network’s coverage of the September 11 attacks in 2001, the War in Afghanistan, and every day of three-week Beltway sniper attacks in 2002, which won an Emmy award. During her time at CBS, she was the only minority female to rank among the 50 most visible network correspondents.

Chen worked at CNN from 1991 to 2001 for CNN International and for the network’s domestic operations. She won an Emmy award for her anchor work covering the bombing at Centennial Olympic Park during the 1996 Atlanta Games. In 1996, she received the Cable ACE Award for Best Newscaster, along with Leon Harris, her co-anchor on The World Today . She created and anchored the network’s first effort to include its online audience in its broadcasting, CNN News Site with Joie Chen.

Before CNN, she worked for six years as a reporter and anchor at Atlanta’s WXIA-TV in Atlanta from 1985 to 1991, and also as a correspondent for USA Today On TV. She began her broadcast journalism career at WCIV-TV in Charleston, South Carolina as a reporter and producer.

In her new role at Medill, Chen will lead the strategy, extra-curricular programs, activities, partnerships and operations of Medill’s Washington, D.C., campus.

She has served on Medill’s Board of Advisers for more than 10 years and was inducted into Medill’s Hall of Achievement in 1997.

She has a net worth of $8 million.