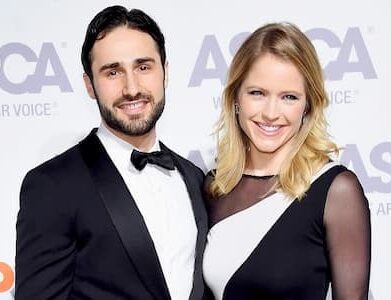 Max Shifrin (Maximillian S. Shifrin) is an American attorney specializing in commercial litigation. He serves as a litigation partner at BakerHostetler. He is the husband to ABC’s The View co-host Sara Haines.

He was born on January 18, 1983 in the United States. He is five years younger than his wife.

He stands at an approximate height of 5 feet 9 inches tall.

He is of Russian ancestry.

He has not revealed the names of his parents but he has said they immigrated from the former Soviet Union. He was raised in New Jersey alongside his brother Eugene Smelyansky.

My parents immigrated from the former Soviet Union, an undeniable shithole. They come in all colors.

Max married his wife Sara Haines on November 22, 2014. The couple met through a dating site, OkCupid and they began dating, nine months later he proposed.

Sara Haines is an American journalist who is a co-host of ABC’s ‘The View’ and also hosts ‘The Chase’. She is a former ABC correspondent and co-host of “GMA 3: Strahan, Sara & Keke.”

Max is an attorney who is a member of the American Bar Association: Litigation Section, New York State Bar Association and New York City Bar Association. He has also been named on the New York Metro Super Lawyers ” Rising Star’ (2014 to 2021). He serves as a litigation partner at BakerHostetler where he is a former associate.

He represents individuals, small businesses and large institutions in state and federal courts across the country. He provides his clients with the judicious advocacy they need to win at every phase of litigation: on the pleadings, in a discovery dispute, at trial, or on appeal.

He also serves as a senior member of the BakerHostetler team serving as court-appointed counsel to the Securities Investor Protection Act (SIPA) Trustee for the liquidation of Bernard L. Madoff Investment Securities LLC (BLMIS), an unprecedented effort involving more than 1,000 lawsuits filed by the SIPA Trustee to recover assets for the benefit of defrauded BLMIS customers.

Max has an estimated net worth of $3 million.