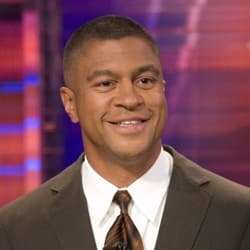 Stan Verrett is an American sportscaster who works for the ESPN and ESPNEWS networks. He makes the majority of his appearances on SportsCenter on Monday through Friday at 11 p.m. or 1 a.m. Eastern time. He’s also worked as a sideline reporter for ArenaBowl XXII and anchored studio segments on ESPN’s college basketball and college football telecasts.

He was born in 1966 in New Orleans Louisiana. Unfortunately, his boyhood home was destroyed by Hurricane Katrina.

Verrett attended Howard University in Washington, D.C., where he was named one of two outstanding journalism graduates in 1989. Howard awarded him the Alumni Award for Distinguished Postgraduate Achievement in 2020. He resides in the Los Angeles area and is a keen golfer. Verrett is a die-hard New Orleans Saints fan who visits the city frequently to watch games.

He is the son of Joyce Verrett. His dad’s details are not yet known, although he died in 2015.

He is Jason Verrett’s cousin.

He is single. Rumors of he dating Alex Solana were not true.

Verrett, who joined ESPN in September 2000 as an anchor for ESPNEWS. He went to the company’s new Los Angeles Production Facility in March 2009 to co-host SportsCenter at 1 a.m. ET with Neil Everett. Prior to joining ESPN, Verrett worked at WDSU-TV, an NBC affiliate in New Orleans, as a weekend sports anchor and reporter. In Norfolk, Virginia, Verrett worked as a sports anchor and reporter for ABC affiliate WVEC-TV and NBC affiliate WAVY-TV.

Additionally, in the Hampton Roads, VA region, he was also known as “Stan The Man,” a radio DJ on WOWI 103 Jamz. Verrett worked as a sports anchor for ABC affiliate WVEC-TV 13 in the area, as well as NBC affiliate WAVY-TV 10. Stan is a member of the fraternity Alpha Phi Alpha. At Howard University, he was admitted into the Beta Chapter. In April 2009, Verrett and Neil Everett co-anchored the 10:00 p.m. PST SportsCenter. He was chosen studio anchor for ESPN’s college football coverage on sister network ABC in August 2016, succeeding John Saunders, who died earlier that month.

His salary is estimated at $700 thousand annually.

He has garnered a networth of approximately $4 Million