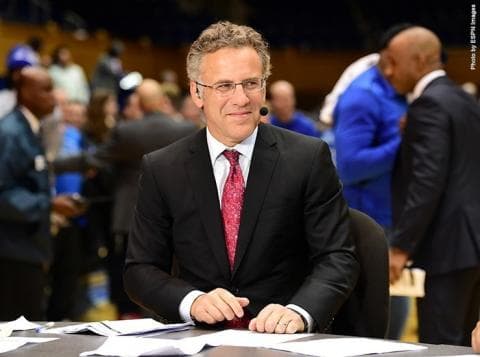 Neil Everett is an ESPN sportscaster. He is the co-anchor of SportsCenter’s West Coast version along with Stan Verrett and Ashley Brewer.

He was born Neil Everett Morfitt in 1962 in Portland, Oregon.

He stands ata a height of 5 feet 11 inches tall.

In 1980, he graduated from Lewis and Clark High School. Everett went to college in Oregon after graduating from high school in eastern Washington. He began his education at Willamette University in Salem, then transferred to the University of Oregon in Eugene, where he received his bachelor’s degree in 1984. At Willamette, he was initiated into the Beta Theta Pi fraternity, which he continued at Oregon.

He is a beloved son to Jackie Everett(mother). His mother was a high school teacher. She died of cancer at the age of 45 while he was a student in Eugene in 1983. His stepfather is Dave Robertson. He was a longtime high school basketball coach at Shadle Park. He won the state title in 1981, led on the court by Mark Rypien.

He has been happily married to his longtime girlfriend called Stephanie Krohn. The duo exchanged their wedding vows on July 18, 2013, after dating for five good years.

Everett has been an anchor for ESPNEWS and SportsCenter since July 2000. He relocated to ESPN’s new Los Angeles Production Facility in March 2009 to co-host the 1 a.m. ET edition of SportsCenter with Stan Verrett. Everett joined ESPN following a 15-year career with different Honolulu affiliates, most recently KGMB-TV, the CBS station, where he served as sports director and weekday anchor. He advanced from behind-the-scenes editorial and production positions to being in front of the camera over the course of those 15 years.

Moreover, before earning a shot as a sports anchor one weekend when the two usual sports anchors were unavailable, he worked as an assignment editor and associate producer. Prior to joining the television news industry, Everett worked at Hawaii Pacific University as an associate athletic director and sports information director. He was also the Jeep Aloha and Jeep Oahu bowlers’ communications director.

His salary is estimated at $700 thousand annually.

He has garnered a networth of approximately $4 Million