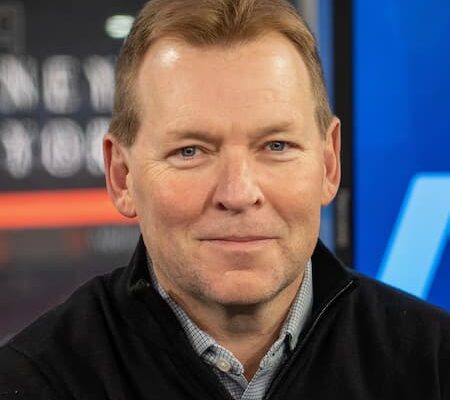 Matt Quayle (Matthew Quayle) is a business and financial journalist. He is a veteran CNBC producer and co-creator of co-creator of “Squawk Box” and “Squawk on the Street.” In 2020, he was honored as a 2020 Business News Visionary.

He also serves as a professor adjunct at Fairleigh Dickinson University (FSU’s) Graduate School of Arts and Media Studies. His academic work in the field of Media Ecology entitled “The Method of the Medium is in Motion” was published in ETC: A Review of General Semantics (2010).

He has not made his age public.

Matt married his wife Becky Quick in 2008. Becky is a journalist Matt Quayle serving as a co-anchor of CNBC’s ‘Squawk Box’. She formerly anchored the nationally syndicated “On the Money,” which was produced by CNBC and was also a reporter for The Wall Street Journal (WSJ).

Quayle is a father to four children; two from his first marriage Natalie and Kimiko and two from his second marriage to Becky; Kyle Nathaniel Quayle, born on August 26, 2011 and a daughter known as Kaylie Noelle Quayle born in October 2016.

The name of his first wife is unknown.

Matt is a senior executive producer at CNBC. He is the co-creator and senior executive producer of “Squawk Box” and “Squawk on the Street” on CNBC. He also writes the “Talking Squawk” blog on CNBC.com. He is a CNBC veteran having joined the network in 1992 as an intern while he was still in college. He served as Senior Producer of the TV series Kudlow & Cramer from 2003 to 2005. He has also been the Senior Producer for the series Bullseye.

He has been named to the TJFR Business News Reporter “30 Under 30” list in 1997, 1998, and 1999. He has also been quoted in numerous national publications including the Wall Street Journal, New York Times, and Money Magazine, which named him one of the “10 Heroes of the Internet Investor” in the Fall of 2000.

He has also been quoted in numerous books as well, including New York Times bestseller: “The Fortune Tellers” by Howard Kurtz (Touchstone, 2000) and “Greenspan: The Man Behind Money” by Justin Martin (Perseus, 2001).

Matt and Dan Quayle are not related they just happen to share a similar name.  Dan is an American politician who served as the 44th vice president of the United States (1989–93) in the Republican administration of President George H.W. Bush. He previously represented Indiana in the U.S. House of Representatives (1977–81) and the U.S. Senate (1981–89).

He has an estimated net worth of $15 million.