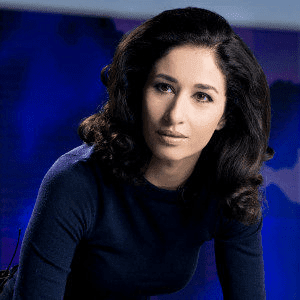 Maryam Nemazee is a media personality serving as a presenter on the Flagship Programme News hour for Al Jazeera English, based in London.

Maryam stands at a height of 5 feet and 6 inches tall.

She attained her degree in History and Politics from Durham University in England. She later joined London City University where she obtained her professional broadcast journalism training.

Nemazee is British by nationality and  she is of Iranian ethnicity.

Her parents names are unknown though they migrated from Iran to the United Kingdom to seek for better future and facilities.

Her relationship status is unknown and so it is not clear whether she is married, single or in a relationship.

She has no children.

Nemazee is currently based in London, news anchoring for Al Jazeera English. Some of her other projects have been in programmes and podcasts; a documentary on the crisis in Venezuela, and an in depth interview on US foreign policy with General David Petraeus.

Previously, she was a London-based anchor and correspondent with Bloomberg Television. She was at Bloomberg during the peak of the financial crisis hosting the prime time global morning Programme. She also worked in New York, Hong Kong, and the Middle East.

Nemazee covered political and economic developments from the field, reporting and anchoring on elections in France and the US, and EU crisis meetings in Brussels. She also attended global events like the G20 summit and the annual World Economic Forum in Davos.

Prior to this, she was one of the main anchors with Al Jazeera English based in Doha. She was on air on the very first day of broadcasting by the channel.

She covered news from across the Middle East and Africa, and also spent some time working on location in Lebanon, Malaysia, and field reporting from Washington DC during the election of President Barack Obama.

She has an estimated net worth of $7 million.