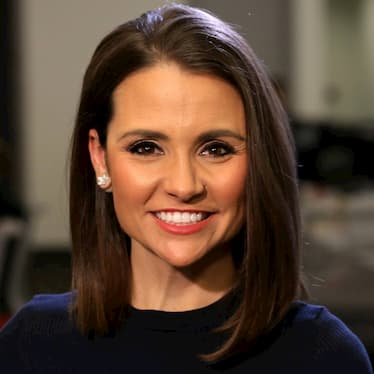 Blakey was born and raised in McKinney but the exact date, month, and year of birth are not known.

Katy attended McKinney High School before joining Southern Methodist University where she graduated president of her class with a BA in journalism and political science.

Katty was born and raised by her parents but she hasn’t revealed any information regarding them. It’s also not known whether she has any siblings.

Blakey is married to Joey Mongo, an attorney, and North Texas native. She hasn’t revealed any further information regarding her husband. The duo resides in Dallas, USA.

Katy and her husband are proud parents of a baby girl named Harper Jane. She was born on May 2nd, 2020. Katy broke the news that she was expecting a child through a post on her Twitter account. She posted a photo of herself and her husband on December 2, 2019, with a caption, “Life news Glowing star Expecting a merry little BABY this spring! So much to celebrate & be grateful for this holiday season! Thank you to everyone who’s sent their well-wishes. ” Through another post on her Twitter account on 8th May  2020, she revealed that her bundle of joy had arrived. “The best kind of news to share! Our baby girl, Harper Jane arrived on May 2nd, 2020. Our hearts are bursting!”

Blakey anchors NBC 5 News weekend evenings and reports during the week. She joined the NBC 5 team in January of 2015. Katy solo-anchored live coverage of the early morning attack on Dallas Police Headquarters and hours-long stand-off. She covered the national outpouring of support for five DPD officers killed while protecting a peaceful protest in downtown Dallas and traveled to Houston for President George H. W. Bush’s memorial services.

On the coast, as Hurricane Harvey made landfall, she provided extensive coverage of rescue and relief operations as the storm caused catastrophic flooding in the Houston area. From endearing “Texas Connects Us” stories to following a young cancer patient bring smiles, hope, and congressional attention to much-needed funding for childhood cancer research to reporting from the mass shooting tragedies in Orlando and Las Vegas, Katy understands the privilege of reporting local and national news to her hometown community.

Prior to joining NBC 5, Katy co-anchored the weekday morning news and reported for KOCO in Oklahoma City, OK. The first reporter on the scene of a deadly medical helicopter crash, her reporting also included a hostage situation ending with the rescue of a six-year-old girl, devastating wildfires, and severe storms. She tracked rare twin tornadoes, covered multiple tornado outbreaks, reported on the wide-scale destruction and heroic rescue operations left by a massive EF5 tornado in Moore, Oklahoma, and President Obama’s tour of damaged communities.

Katy also served as a reporter and anchor for KTEN-TV in Denison, Texas, where her investigative reports into private jail funding led to resignations and changes in local law enforcement. She also interned for The Dallas Morning News and WFAA during the political convention in Boston.

Katy’s work has also been honored with Lone Star Emmy nominations, including Best News Anchor, and recognized by the Oklahoma Associated Press.