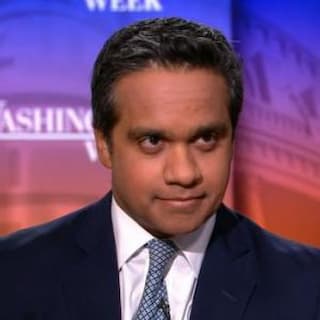 Manu Raju is an American media personality serving as the Chief Congressional Correspondent for CNN, covering the United States Congress and campaign politics. He previously reported for Politico as a senior Capitol Hill correspondent and also reported for The Hill newspaper, Congressional Quarterly, and Inside Washington Publishers.

He stands at a height of 5 feet 5 inches tall.

He is an American.

Raju attended Hinsdale South High School and later attended the University of Wisconsin–Madison, graduating in 2002 with a degree in business administration. During college, he worked as the sports editor for The Badger Herald student newspaper.

Manu is the son of Tonse N. K. Raju and Vidya Raju who are both doctors. His father is a neonatologist who served as professor of pediatrics at the University of Illinois in Chicago and is currently working as Program Director in the Pregnancy and Perinatology Branch at Eunice Kennedy Shriver National Institute of Child Health and Human Development, of the NIH in Bethesda as well as a Deputy Editor, Journal of Perinatology. He is a member of the American Pediatric Society and American Osler Society. He is the NIH liaison to the AAP Committee on Fetus and Newborn and to the Executive Committee of the AAP’s Section on Perinatal Pediatrics.

Raju was brought up alongside his brother Sharat Raju, a film and TV director. He attended Hinsdale South High School before earning a Bachelor of Arts degree in English from the University of Michigan, where he was the sports editor of The Michigan Daily and worked as a freelance reporter for the Daily Herald. He then earned a Master of Fine Arts in Directing from the American Film Institute.
Raju co-founded the Yale Visual Law Project and co-produced three documentary short films as a Visiting Fellow at the Information Society Project.

Manu is married to Archana Mehta who is a professional entrepreneur and businesswoman in America. She is best recognized as the owner of the marketing company ‘AM Strategies, Inc. She holds a degree in mechanical engineering. Details on when and where the duo exchanged their marriage vows remain unknown.

Raju and his wife have a set of twins, a son and a daughter who were born in 2015.

Raju is CNN’s chief congressional correspondent, covering Capitol Hill and campaign politics. Raju is a veteran reporter in Washington, having previously served as a top Capitol Hill correspondent at Politico for seven years. Prior to his time at Politico, he reported for The Hill newspaper, Congressional Quarterly and Inside Washington Publishers. He has long been a frequent guest on political talk shows on TV and radio.

Raju has developed a reputation as a reporter who can find out what politicians are privately discussing out of the public’s view. And he is well known for his sharp and skillful questioning of politicians, a skill he showcased in 2014 when he moderated debates in two of the biggest races in the country — for a key Senate seat in Colorado and a hotly contested governor’s race there as well.

Raju got his start in media working at the student newspaper The Badger Herald at the University of Wisconsin-Madison, his alma mater. And his writing roots extend to his late grandfather, Gopalakrishna Adiga, a legendary poet from South India who wrote in the language of Kannada. Raju is a long-suffering Chicago sports fan and a native of the Greater Chicago area.

Raju has won multiple journalism awards for his reporting on the major battles consuming Washington and his coverage of campaign politics. In 2012, Raju was part of a team of four reporters who won the White House Correspondents Association’s prestigious Merriman Smith award for presidential reporting under deadline pressure for their coverage of the debt ceiling crisis. In 2015, Raju also was awarded first prize by the Society of Professional Journalists in D.C. for beat coverage of the 2014 midterm elections, and a Folio: Eddie Award for a feature profile on Senator Elizabeth Warren. In 2017, Raju won the Joan Shorenstein Barone award, given annually for best congressional reporting by the Radio and Television Correspondent Association.

He has an estimated net worth of over $3 million.