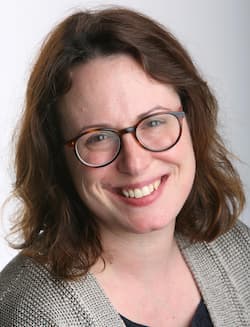 Her height is not revealed.

Maggie is the daughter of Clyde Haberman and Nancy Haberman. Her father was  a longtime journalist for The New York Times and serves as a professor at the Macaulay Honors College at Hunter College teaching an honors seminar course on New York City. He also served in the U.S. Army in 1968, serving two years, first in Georgia, then in Germany. Her mother is an executive vice president and the media director at Rubenstein Communications, a public relations firm in New York.

Haberman was brought up alongside her brother Zach Haberman who serves as the head of content at the New York Daily News. She also have a half sister Emma Haberman from her fathers second marriage to Kathleen Jones, former director of special projects at Human Rights First and former associate publisher of The New York Review of Books.

Maggie and Dareh exchanged their marriage vows on November 9 2003 in a ceremony officiated by Judge Edward R. Korman, the chief judge of the United States District Court in Brooklyn,  at the Tribeca Rooftop in Manhattan.

Maggie and her husband has three children together and the family recides in New York.

Maggie joined The Times in 2015 and currently serves as a White House correspondent. She was part of a team that won a Pulitzer Prize in 2018 for reporting on Donald Trump’s advisers and their connections to Russia.Her reporting style as a member of the White House staff of the Times features in the Liz Garbus documentary series The Fourth Estate. Among the daily frustrations of her work covering the Trump administration, she is also shown on camera in her role as a mother being interrupted during tense moments to take phone calls from her children, at one point declaring to her phone, “You can’t die in your nightmares.”

She became a political analyst for CNN in 2014. Prior to joining The Time, she previously worked  for the New York Post. In 1999, the Post assigned her to cover City Hall, where she became “hooked” on political reporting. Haberman worked for the Post’s rival newspaper, the New York Daily News, for three and a half years in the early 2000s, where she continued to cover City Hall. She returned to the Post to cover the 2008 U.S. presidential campaign and other political races.

Haberman also worked as a political reporter at Politico, from 2010 to 2015.

In 2018, Haberman’s reporting on the Trump administration earned the Pulitzer Prize for National Reporting (shared with colleagues at the Times and The Washington Post), the individual Aldo Beckman Memorial Award from the White House Correspondents’ Association,  and the Front Page Award for Journalist of the Year from the Newswomen’s Club of New York.

Maggie is the author of Held Captive: The Kidnapping and Rescue of Elizabeth Smart  and has also written another book  currently untitled, and will be out in 2022. The  book will be an instant classic, a definitive and fascinating account of Donald Trump, his life and his presidency.

She has an average annual salary ranging between $128K-$141K.