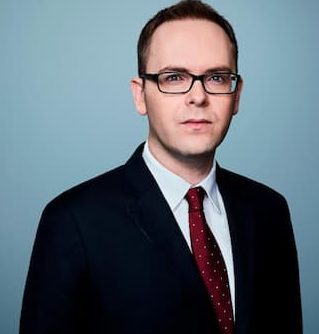 He is a Canadian.

He earned a Bachelor of Business Administration from York University’s Schulich School of Business.

Dale is the son of Jennifer Dale and Ronald Dale. He was born to a Jewish family and raised in Thornhill, Ontario. However, not much is known about his parents.

He was brought up alongside his sister Brittany Dale but no further details regarding her are available.

Daniel is in a relationship with Kelsey Shamburger.

My boyfriend wrote some words for the Post about covering Trump and in my (clearly unbiased) opinion they are very good. https://t.co/XmfWWJIw08

Daniel serves as a reporter in CNN’s Washington Bureau, where he fact-checks political claims. During the 2020 election cycle, he fact-checked President Trump, Democratic presidential candidates, and other lawmakers. Prior to joining CNN in 2019, Dale spent over a decade at the Toronto Star, including as Washington Bureau Chief from 2015 to 2019, where he was the first journalist to fact-check every false statement from President Donald Trump

As a Toronto Star reporter and bureau chief at Toronto City Hall from 2010 through 2014, he broke several stories about Toronto Mayor Rob Ford. As Washington Bureau Chief, he covered trade negotiations, the 2016 and 2018 campaigns, and breaking news and social issues around the United States, including mass shootings in Charleston and Dallas, racial segregation in Milwaukee, and the opioid epidemic in Massachusetts.

Dale won the Norman Webster Award for International Reporting at Canada’s 2019 National Newspaper Awards, the National Newspaper Award for Short Features in 2012, and the Edward Goff Penny Memorial Prize for Canada’s best young journalist in both 2010 and 2011. He was named to Rolling Stone’s “Hot List” in 2018 and by Toronto Life as one of Toronto’s 50 most influential people in 2017 and 2018.