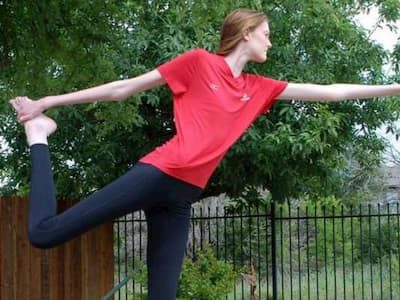 Maci Currin is the World Tallest teen standing at a height of 6 feet 10 inches tall. She is set to be named in 2021 Guinness World Records book for two titles — longest female legs and longest teenage legs.

Her mother told Barcroft that she noticed her daughter was taller than the average kid when she was about 18 months and was already 2 ft 11 inches tall.

“I realized that she was taller than the average kid at about 18 months when she was already 2ft 11in. She was at a Mother’s Day Out and I went to pick her up and she was already ahead above the other children. There’s a picture of her standing next to another little girl and she looked like she was two years older. There were four or five years that she grew like five inches in a year, which is a lot. She has always had long legs. I used to think I had long legs but not anymore.”

She has an older brother known as Jacob who stands at a height of 6 feet 3 inches tall.

Currin has not disease, she is just tall naturally. Her mother revealed when she was born she was only slightly longer than average and measured 19 inches. However, she grew rapidly and was 35 inches tall by the time she was 18 months old. Her rapid growth rate continued for many years. At the age of 9 years, she was 5 feet 7 inches tall.

She plays volleyball in high school. In 2019, she participated in the USA Volleyball Girls Junior National Championships with her high school team.

In October 2020, when the 2021 Edition of Guinness World Record was published, she was recorded as ‘having the world’s longest legs (female)’ and ‘longest legs on a teenager’ with her left leg measuring 135.267 cm and her right leg measuring 134.3 cm. She broke the record of Ekaterina Lisina of Russia, who previously held the title of having the longest legs at 132.8cm.

The world’s tallest living woman, a title held by China’s Sun Fang at the height of 7 feet 3 inches. The record for the tallest woman ever is held by China’s Zeng Jinlian at 8 feet 1 inch, she died in 1982.

Stressed, blessed, and pumpkin obsessed Leggings and cardigan by @elevatedcloset