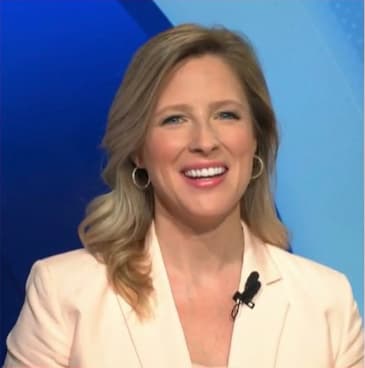 Lyndsay Keith is an American media personality serving as a co-host of  “Spicer & Co.,” on Newsmax TV alongside Sean Spicer. She previously served as an On-Camera Sports Reporter & Half-Time Host at Flames Sports Network and also worked at Google as a brand strategist as well as deputy communications director for the Republican National Committee.

Keith was born on23 September 1986 in Colorado Springs, Colorado.

Lyndsay attended Northland International University (also called NBBC), where she received a Bachelor of Arts degree in counseling and also attended Liberty University, where she earned a Master of Arts degree in Information and Media Studies. She also received a civic leadership certification from Harvard Kennedy School in 2020 (also known as the John F. Kennedy School of Government).

Keith is the daughter of Chaplain Keith and Kathy Keith. Her father is a U.S Air Force veteran.

She was brought up alongside her brother Jon Keith and a sister named Katie Keith Muri.

Lyndsay has kept her marital status off the public eye and therefore she hasn’t revealed any information on whether she is married, single or divorced.

Prior to joining Newsmax, she worked at her college TV network. She was an On-Camera Sports Reporter & Half-Time Host at Flames Sports Network for two years and one year as Sports Anchor & Sideline Reporter. She also worked as the senior director at Harbinger Outreach, Deputy Director of Communications of Republican National Convention and Marketing & Experiences for Google and also worked  in an array of communications marketing and media arenas, including advising the Mitt Romney presidential campaign