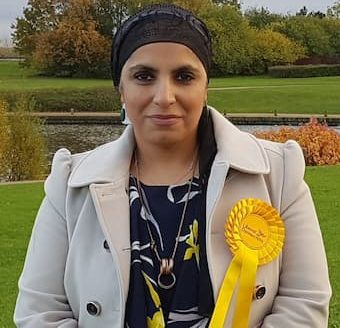 Dr Saleyha Ahsan is a broadcast journalist and doctor serving as an A&E doctor in Bangor Hospital, North Wales. She also works as a humanitarian doctor in conflict zones.

Saleyha is a Muslim by religion.

She graduated from the Dundee University School of Medicine in 2006. She also holds a Masters degree in International Human Rights and Humanitarian Law.

Saleyha is the daughter of Ahsan-ul-Haq Chaudry who died in December 2020 of coronavirus. Her mother died in October 2019, Bother her parents were teachers, her father taught maths and computer science.

“My dad suffered from asthma and in the last three or four years he’d started on an amazing treatment which gave him his life back. He was going out socialising and his lungs felt amazing.

He loved Scotland, bagpipes and steam trains. His dad was a train driver in India and before he became unwell with his asthma we used to go up to the ‘Harry Potter’ train, the Jacobite steam train that runs from Fort William to Mallaig. He also loved travelling overseas.

I thought we’d be able to do it all over again but instead, he was locked up indoors shielding and it was awful. My dad was super careful and really strict but on the 19th or 20th of December he began to display Covid symptoms.

I’m one of his registered carers so I was given permission to stay with him when he was taken to hospital. I arrived on the 23rd and stayed with him until the 28th when he died. I knew things were bad when he struggled to breathe without his CPAP mask. It was a long drawn out death, I feel so bad about how long it took and the agony of watching it. There was one day where he said: ‘Just let me die’, which was heartbreaking.”

She has five siblings who are all doctors; Dr. Shoaib, Dr. Safiyah, Dr. Saima, Dr. Syira and Shazlee Ahsan. Dr. Syira is a GP in North East London, with her work including the out of hours area of Queen’s Hospital.

Dr Saima Ahsan is a paediatric consultant at St Mary’s Hospital, London. Dr Safiyah Ahsan is a London GP who works in urgent care. Dr Shoaib Ahsan is a doctor in acute medicine working in London.

Dr. Saleyha has not publicly revealed her marital status.

Ahsan is a former British army officer who served with the Royal Army Medical Corps in Bosnia. She was the first British Muslim woman to graduate from the Royal Military Academy Sandhurst as an army officer.

She revealed in an interview that she decided her future layin medicine while she was serving in Bosnia as a medical support officer as part of a NATO stabilisation force in 1997.

“Our role there was to keep all sides apart so that they could actually get on with the voting they needed to do. And it was while I was there I saw some horrific trauma that my soldiers dealt with- people who were stepping on landmines, getting their legs blown off, because their homes were booby trapped by the opposing side. I saw the amazing work of military medics looking after them and thought I wanted to do medicine.

Dr Saleyha is a broadcast journalist who began her career as a junior reporter for BBC local radio.She took a four year break from journalism to join the Royal Military Academy Sandhurst. She resumed her journalism career as a freelancer after joining the University of Dundee.

Her current affairs broadcast work spans coverage of health, humanitarian and conflict reporting. She has worked as either a filmmaker or a doctor in Syria, Libya, Kashmir, Palestine, DRCongo and Pakistan. After years of witnessing and documenting the challenges of access to healthcare in conflict zones.

Ahsan began her on screen experience in 2001 when she co-presented and filmed for a Chameleon Films series, Dangerous Journeys for Channel 4, which saw her travelling to both the Indian and Pakistan sides of Kashmir interviewing Kashmiri mujahideen in the pre-9/11 era. She reported for a BBC Radio 5 Live Special documentary from within a mujahideen training camp in Kashmir, after gaining exclusive access just weeks after 9/11. She then went onto make a further special report in Palestine during the intifada of 2002.

In 2011, during the uprising in Libya, she spent six months independently filming doctors on the front line. She reported for the BBC’s From Our Own Correspondent, Channel 4 News online, BBC online, the BMJ online and Latitude News. In 2013 she was followed to Syria by a BBC Panorama team making the film Saving Syria’s Children, where she was working as a doctor.

She also co-presented the hit BBC2 health series, Trust Me, I’m a Doctor. She has also presented the BBC1 program Fast Tales about Ramadan and co-presented a BBC2 Horizon special on the Longitude Prize in recent years.

Her medical and military background form the inspiration for her media work to date. She presented a special report for Newsnight on Army medical preparations for battleground theatres and a BBC Inside Out special on the increasing role of reservists in the Army today.