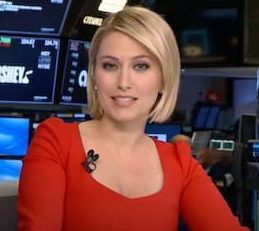 Morgan Brennan is an American journalist serving as CNBC’s co-anchor of Squawk on the Street, which broadcasts live from the New York Stock Exchange. She formerly co-anchored Squawk Alley.

Morgan has not revealed the names of her parents but she has said that her mother was a housewife while her father was a salesman. There is no information available on whether she has siblings or not.

Morgan is the wife of Matthew Cacciotti, the couple got married on August 6, 2011 after dating for 5 years from 2006. They met while Morgan was still studying at New York University.

Matthew Cacciotti is an American entrepreneur serving as the president of MMC Trading. He is also the founder of and CEO of Gold Streer Trading, a full-service introducing brokerage firm that provides clients with cost-effective clearing, price discovery, and productive order execution. He began his career as a runner and clerk at B+C trading where he started learning about trading.

Morgan and her husband Matthew have two children together; a daughter known as Remi born on March 30, 2016. and a son born in July 2020.

Morgan has a Tattoo on her left wrist. Her tattoo was sported while eating cricket on the Squawk Alley show.

Brennan is a co-anchor of CNBC’s “Squawk on the Street” which broadcasts live from the New York Stock Exchange. She joined the show in June 2020 after one of that show’s co-anchors, Sara Eisen, was devoted exclusively to “Closing Bell” rather than have her work on two different programs across CNBC’s schedule. Morgan was previously a co-anchor on technology-heavy “Squawk Alley.” She joined CNBC in December 2013 as a general assignment reporter reporting on business and finance topics for various shows in the Business Day TV line-up.

Prior to joining CNBC, she was a Forbes staff writer and reporter. She joined Forbes in June 2009 as a scheduling assistant and video production coordinator. She organized shoots and interviews for Forbes Video Network, co-produced videos including a Forbes series called Thought Leaders. In May 2010 she was promoted to anchor and reporter for Forbes Video Network where she anchored several regular web video series. She also conducted on-camera interviews with heads of state, billionaires, CEOs of global corporations, and A-list celebrities; Secured interviews, wrote scripts, recorded voice-overs, and executed video edits.

She also served as a regular guest on Fox News Channel for Forbes on Fox. She made weekly appearances on 30-minute debate show, covering an array of business and economic topics including tax code, government regulation, employment, healthcare, commodities prices, and stock market analysis.

She began her career as an editorial intern for Newsweek International where she wrote several stories for the magazine and website and also fact-checked other writers’ articles.

Morgan has an estimated net worth of $6 million.