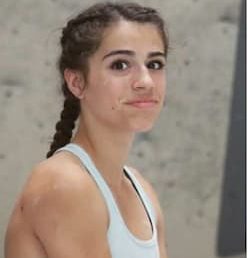 Luce Douady was a 16-year-old French climber who won the 2019 Youth World Championships title in bouldering in Colorado. She died on June 14, 2020 after falling from a cliff near Crolles in southeastern France while climbing with friends.

There is no available information about the names of her parents.

Douaday was a climber who began climbing at a very young age in the Chartreuse Massif, a mountain range in France with her father. In 2019 she won the Youth World Championships title in bouldering in Colorado. She also won the bronze medal at the senior level at the 2019 IFSC Climbing European Championships.

According to Reuters Luce died in a fall while exploring cliffs near her home in southeastern France. She was with a group of her friends when she slipped and fell 150 meters on to an exposed section of access path while crossing between two climbing areas.

The French Federation of Mountaineering and Climbing (FFME) released a statement which read;

“It is with immense sadness that the climbing community learned this Sunday of the death of one of their own. Luce Douady, 16 years old and young hope of French climbing, was the victim of an accident in a passage equipped with a handrail between two climbing sectors on a cliff near Crolles (Isère) during an outing with friends.

Luce was a young athlete from the French climbing team, very promising. At only 16, the future was before her. This terrible news hit his training comrades, his coaches and his club, Chambéry Escalade hard. But today, the whole federation is in mourning. We obviously think of his family and we will be at his disposal.

Brilliant in competition, 3rd at the European Difficulty Championship 2019, world champion of young boulders in 2019 at Arco and 5th at the end of her first stage of the World Cup of boulders in Vail that same year, Luce Douady was a in love with all facets of climbing, capable of major achievements in natural sites (8b + in 2020).”