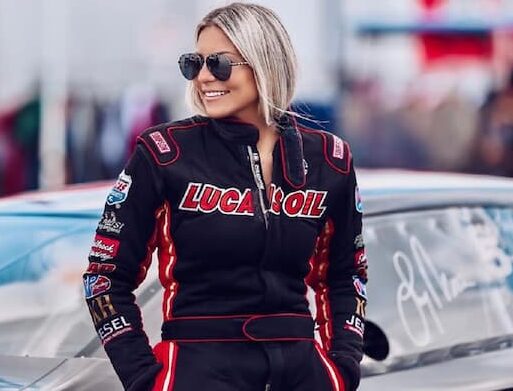 Lizzy Musi is a race driver, a driver of the Dodge Dart Pro Nitrous car. She is the first woman to win in Pro Nitrous, she set a speed record of 209.23 miles per hour. She features on the Discovery series Street Outlaws.

Musi is engaged to fellow racer on Street Outlaws Kye Kelley. The couple began dating in 2017 and got engaged on July 31, 2021. Lizzy revealed about the engagement in an Instagram post. This is the same day that she crashed at the 2021 NPK Darlington race. Kye was previously married to Alisa Mote.

Lizzy is a racer who began racing at the age of eight. In 2007, at the age of 16, she competed in her first junior drag race. In 2014 she began Pro Nitrous racing behind the wheels of King Kong 5, which is a 2009 Dodge Stratus.

She was the first woman to win in Pro Nitrous, and she set a speed record for the class at 209.23 miles per hour. In October 2019 she set another record when she hit 208.62 miles per hour in 3.615 seconds in the King Kong 7 Dodge Dart at the Professional Drag Racers Association Fall Nationals in Darlington, S.C.

Lizzy is a cast member of Street Outlaws on Discovery. She is the first female to ever win Street Outlaws: No Prep Kings and also the first driver on the circuit to win three straight races.

In 2020 she took part in Street Outlaws: Fastest in America, filming extensively on public roads at undisclosed locations.

What Is The Name of Lizzy Musi Car?

On 31st July Lizzy was involved in an accident at the 2021 NPK Darlington race. The crash happened in the first round at Darlington Dragway in Hartsville, South Carolina. She crashed ‘Bonnie’, the new car that she recently debuted at the NPK event at New England Dragway in Epping, New Hampshire, while facing Brandon James.

After the crash, Pat Musi Racing Engines released a statement on social media saying Lizzy was at the hospital getting checked as a precaution.

“Thank you to our family, friends, fans, and sponsors for your support and concern after Lizzy was involved in a top-end crash today during the first round of Street Outlaws No Prep Kings at Darlington Dragway. She is currently at the hospital getting checked out as a precaution but all indications so far are that she is OK. Robert Hayes Motorsports builds an amazing race car that did its job and kept Lizzy safe.‘Bonnie’ is already on its way to Robert’s shop to assess the damage and figure out our game plan. We’re a strong team and we will be back.”

Thank you to our family, friends, fans and sponsors for your support and concern after @Lizzy_Musi was involved in a top end crash today during the first round of @StreetOutlaws No Prep Kings at @DDragway. She is currently at the hospital getting checked out as a precaution (1/2) pic.twitter.com/a8ExMs7qsl

Lizzy is not dead.