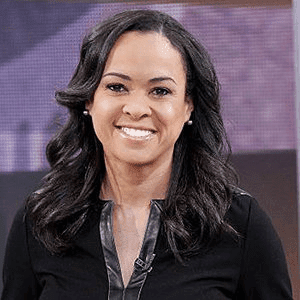 Linsey Davis is a two time Emmy Award winning correspondent with ABC News. She is also the author of children’s book, The World Is Awake. She has been reporting for World News, Good Morning America, 20/20 and Nightline since 2007.

She earned her Bachelors degree in psychology from the University of Virginia and a master of arts degree in Communications from New York University. She also attended Moorestown Friends School in New Jersey.

Her parents names is not revealed.

She is a correspondent for ABC News. She has been reporting for World News, Good Morning America, 20/20 and Nightline since 2007.  She moderated ABC News’ Democratic presidential debates in September 2019 and February 2020.
In 2009, she reported on the miracle on the Hudson and Michael Jackson’s death. That same year, she also made waves with her “Nightline” report “Single Black Female.”
She  joined ABC News as a New York-based correspondent for ABC NewsOne, the network’s affiliate news service. Before joining the network in June 2007, Davis was anchor of the weekend evening newscasts at WTHR-TV in Indianapolis. She started out as a reporter in 2003. From 2001-2003, she was a reporter at WJRT-TV, the ABC owned station in Flint, Michigan.

Davis has received several honors for her reporting, including two Emmy Awards and a regional Edward R. Murrow Award.

On February 6, 2016 Linsey published her first book a Christian children’s book titled, The World Is Awake: A Celebration of Everyday Blessings. She co-authored the book with Joseph Bottum and it was published by Zonderkidz.
On August 6, 2019, Lindsey published her second book, One Big Heart, A Celebration of Being More Alike than Different. The book is published by Zonderkidz and illustrated by Lucy Fleming. The book celebrates diversity as well as the things we all have in common.

Details about her total estimation of net worth is unavailable.