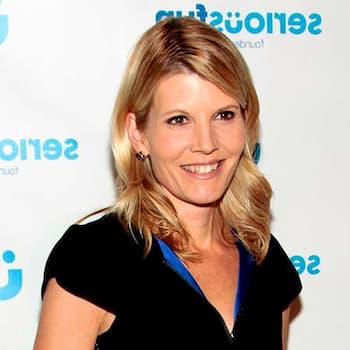 Kate Snow  is an American media personality working for NBC News as a Senior National Correspondent to various NBC platforms, including Today, NBC Nightly News, Dateline NBC, and MSNBC. Snow also anchors the Sunday edition of NBC Nightly News and frequently substitutes for the weekday broadcast. She previously was a co-anchor for the weekend edition of Good Morning America on ABC  and  also appeared on its weekday edition and World News as a fill-in anchor and correspondent.

She graduated from Cornell University  and holds a masters  degree  in foreign service from Georgetown University.

Kate is the daughter of Dean R. Snow, an anthropologist and also an Iroquoian expert. He was working at Pennsylvania State University’s as professor. Her family moved to New York when she was just six months old and that is where she spent her childhood.

She was brought up alongside her sister Barbara Snow who’s a social worker and her brother Joshua Snow.

Snow is married  to Chris Bro a radio host who started his own radio station, Punk Rock Radio. The two exchanged their marriage vows in September 25, 1999. He suffered from coronavirus in April and Kate , through an article explained how it all started,” Chris started feeling lousy on Thursday, April 2. I remember I was working on a news story, our teenagers were doing homework, and Chris disappeared to take a nap — so not like him. He came downstairs for dinner and his eyes were rimmed in red, almost like pink eye. I remember saying “You really don’t look good. I think you should go down to the basement guest room tonight.” I now know that red eyes are a possible sign of infection. Chris had been coughing for a couple of days— a dry cough. Now he was fatigued and had crippling body aches. That first night he said he couldn’t sleep. He couldn’t find any position that didn’t cause searing pain in his muscles and joints. He also had chills and a slight fever. He lost his sense of taste and smell and felt heaviness in his chest. The cough got worse. But he never struggled to breathe or gasped for air.”

Kate and her husband has two children together, a son  Zach Bro and a daughter Abigail Keller Bro.

Snow had undergone two miscarriages , one in 2010 and another in 2012. She  shared her story detailing that after unexpectedly becoming pregnant with her third child, she had a miscarriage. Two years later, it happened again as she explained,” In 2012, I took another test and got another shock. I was pregnant again, against all odds. This time we told people right away. No more secrecy. If I were to suffer another loss, I thought, I’d rather have people to lean on. But this pregnancy would be far more difficult. At the end of the first trimester we learned that the fetus had Down syndrome. After another ultrasound we learned that like many babies with Down syndrome, ours had a heart defect. The heart tissue hadn’t come together correctly, leaving a hole in the center of his heart. Yes his. It was a boy. We decided to name him Max. We waited two weeks for another test that would reveal the severity of the heart defect. I felt a constant knot in my stomach. I was already 20 weeks pregnant — showing and wearing maternity clothes at work. We were reading everything we could about raising a child with special needs, imagining our new life. We knew the next appointment would be a turning point. That’s when I heard that sentence for the second time in my life. “I’m sorry Kate, there’s no heartbeat.” It was like being run over by a truck all over again.”

Snow joined NBC News in 2010 as correspondent for Dateline NBC and a contributor to other NBC programming. In September 2015, Snow began anchoring the Sunday broadcast of NBC Nightly News. That same month, Snow began hosting a two-hour block on MSNBC Live. One year later, she won a News & Documentary Emmy Award for her interview of numerous women including Andrea Constand who had accused Bill Cosby of committing sexual assault, which had aired on Dateline NBC. In April 2017, she left her anchoring duties at MSNBC to become a Senior National Correspondent at NBC News, covering various stories for NBC Nightly News, Today and Dateline NBC. In October 2019, Snow began hosting a true-crime television series titled Relentless, which airs on Oxygen.

Prior to joining NBC, she worked for ABC which she joined  in 2003 as Good Morning America’s White House reporter before she was tapped to co-host the morning show’s weekend edition. During the 2008 presidential race, Snow was ABC News’ correspondent covering Hillary Clinton’s presidential campaign, the 2004 Democratic National Convention, and Sarah Palin’s campaign for vice president. She also worked at NPR and NBC Radio, and also worked as a reporter at KOAT-TV in Albuquerque, New Mexico, from 1995–1998 and at CNN from 1998–2003.