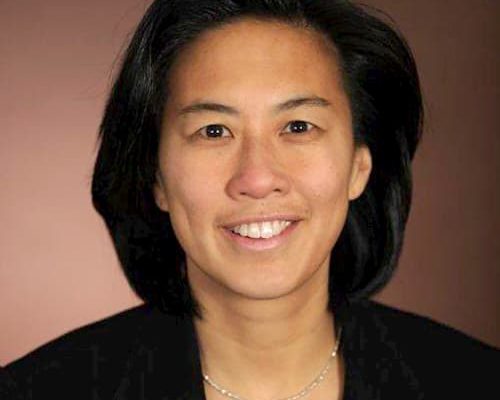 She belongs to Asian descent.

Kim is an American national.

She attended Ridgewood High School in Ridgewood, New Jersey where she played tennis and softball. She later attended the University of Chicago graduating with a B.A. in public policy.

She is the daughter of Jin Ng and Virginia Fong. Her father is a financial analyst, an American of Cantonese descent while her mother was a banker, Thailand-born of Chinese descent.

Kim is married to Tony Markward, a co-founder of Silas Wines. He previously worked as a public policy consultant and then as a television editor. He later joined food and beverage company, where he invested in a coffee company.

Ng is not gay, she is married to Tony Markward.

There is no information available on whether Kim has any children.

Ng is the highest-ranking female baseball executive. Her interest in baseball started when she played stickball on the street in Queens and her father taught her about sports. While in college she played softball for four years and was named MVP infielder.

After graduation, she began her career as an intern with the Chicago White Sox and in 1991 she was hired full-time as special projects analyst before being promoted to Assistant Director of Baseball Operations under then-GM Ron Schueler in 1995. In 1995 she became the youngest person, and the first woman, to present a salary arbitration case in the major leagues when she worked for the White Sox, regarding the case of pitcher Alex Fernandez, and won.

In 1998 she joined the New York Yankees as assistant general manager, becoming the youngest in the major leagues, at age 29, and one of four women (the other three are Elaine Weddington Steward and Raquel Ferreira of the Boston Red Sox and Jean Afterman of the New York Yankees) ever to hold the position.

In 2001 she joined the Los Angeles Dodgers as vice president and assistant general manager. She left the Dodgers on March 8, 2011 and took the position of senior vice president of baseball operations for Major League Baseball.

Making history by bringing a lifetime of excellence, Kim Ng steps to the helm as GM. #JuntosMiami pic.twitter.com/UrYESbjTHe

Kim released a statement;  “It is the honor of my career to lead the Miami Marlins as their next general manager. We are building for the long term in South Florida, developing a forward-thinking, collaborative, creative baseball operation made up of incredibly talented and dedicated staff who have, over the last few years, laid a great foundation for success.”

Her actual salary as the general manager at Miami Marlins is unknown.