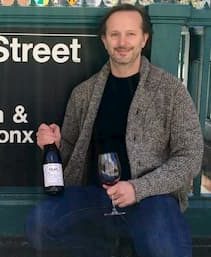 Tony Markward is the co-founder of Silas Wines. He is the husband of Kim Ng, who in November was named as general manager of the Miami Marlins becoming the MLB’s First Female, Asian American General Manager.

Tony is a co-founder of Silas Wines alongside Todd and Frank. In 2005 lawyer Todd and software guru Frank went at Calliope Vineyard to pick some grapes, they ended up buying altitude micro-farm—3 acres of vines planted in 1985 in the primeval foothills of Mt. Hood. They named their hobby wine label “Silas,” meaning ”Man of the Woods,” for the classic Oregon forest that surrounded the vineyard.

While in China Todd met then La Mujer de Hierro, Baseball Executive Kim, wife of Tony. This led to the partnership.

Tony and Alex Clark deal with winemaking, curate fruit from family farms, and blend the wines for each vintage. Todd Sigaty is involved with marketing.

Tony was first introduced to wine by his great grandfather, a grocer in Dubuque, Iowa who made wine from whatever would ferment in his garden. Dandelions, fruit from an unruly and varied orchard, and four rows of concord grapes all got a chance. Tony introduced himself to wine with sips of some of these homegrown and not particularly pleasant beverages.

Prior to joining the winery, Tony worked as a public policy consultant and then as a television editor. He later joined food and beverage company where he invested in a coffee company, prepped part-time in a restaurant kitchen, and talked and drank wine with friends, family, and wine professionals in their living rooms, shops, vineyards, kitchens and cellars.

She has a long and storied career in baseball. She began her career as an intern with the Chicago White Sox, going on to managerial posts with the New York Yankees and the Los Angeles Dodgers before taking on the position of senior vice president of baseball operations for Major League Baseball in 2011.