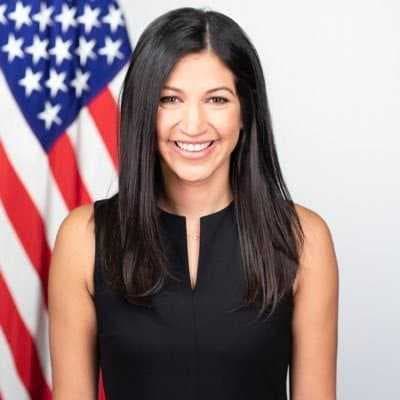 Katie Waldman whose birth name is Katherine Rose Miller is an American government official serving as Press Secretary to Mike Pence, the Vice President of the United States. She served as the communications director for U.S. Senator Martha McSally.

Katie was born in 1992 in Fort Lauderdale, Florida, United States of America.

Katie stands at a height of 5 feet 6 inches tall.

What Nationality is Katie Waldman

Katie is an American national.

What is Katie Waldman Ethnicity

Katie has a Bachelor’s Degree in Agricultural Economics from the University of Florida. She earned her Master’s Degree in Public Administration from The George Washington University.

Katie is the daughter of Glenn Waldman and Sheryl Waldman. Her father is a lawyer and the of Waldman Trigoboff Hildebrandt & Calnan, P.A. He has been practicing law in the State of Florida and in federal court for more than 34 years. According to the firm’s website, he holds the maximum rating “AV” (pre-eminent) by the Martindale-Hubbell® Law Directory. He is also a certified mediator and arbitrator.

Katie has two siblings; a brother known as William Waldman and a sister known as Andie Waldman. William works in TV production while Andie works in the mental health field.

Katie married her husband Stephen Miller in February 2020 at the Trump International Hotel in Washington, DC. The ceremony was officiated by Rabbi Aryeh Lightstone, a senior adviser to U.S. Ambassador to Israel David Friedman.

Stephen is a senior advisor for policy to President Donald Trump. He was a senior policy adviser on the Trump campaign in January 2016 before being promoted to policy director for the president’s transition team later that year. He is credited with helping engineer the president’s hard-line immigration policies, which include family separation and a travel ban. The same month Miller and Waldman were engaged, a report by the Southern Poverty Law Center published emails that Miller sent to conservative news website Breitbart, in which he promoted white nationalist talking points.

Katie is Jewish in religion. She is practicing conservative Judaism.

Katie began her career as a press assistant of the National Republican Senatorial Committee. In January 2015 she became the press secretary for U.S. Senator Steve Daines.

In November 2017 she joined the U.S. Department of Homeland Security as the deputy press secretary. In February 2019 she became the communications director for U.S. Senator Martha McSally until September 2019.

Katie serves as the Press Secretary to Mike Pence, the Vice President of the United States since October 1, 2019.

On May 8, 2020 Katie tested positive of coronavirus, making her the second person who works at the White House complex known to test positive for the virus this week. She had tested negative, a day before her positive result.

Her diagnosis was revealed by President Donald Trump during a meeting with White House reporters. He said, “She’s a wonderful young woman, Katie, she tested very good for a long period of time, then all of a sudden today she tested positive. She hasn’t come into contact with me. She’s spent some time with the vice president. He went on to again bash COVID-19 testing procedures, as he did when his valet was diagnosed on May 7.

So she tested positive out of the blue. This is why the whole concept of tests aren’t necessarily great. The tests are perfect but something could happen between a test where it’s good and then something happens and all of a sudden. She was tested very recently and tested negative and then today I guess for some reason, she tested positive. Mike [Pence] knows about it and Mike has done what he has to do.”