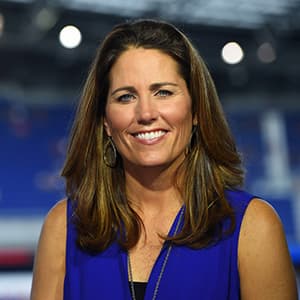 Julie Foudy  is a retired American soccer midfielder who won two FIFA Women’s World Cups and two Olympic gold medals.  She serves as the lead game analyst for ESPN’s coverage of the US National Women’s Team and college soccer.

She was born on January 23, 1971 in San Diego, California, United States

She stands at a height of 5 fee 6 inches tall.

She is a loving daughter to Judy Foudy and Jim Foudy.

She has been married to her husband Ian Sawyers since 1995. They met at Southern California when he was a club coach for the Mission Viejo Herricanes and she was a member of the Soccerettes. Foudy moved to the Bay Area when he enrolled at Stanford.

Foudy, the former captain of the United States Women’s National Team. She joined ESPN as a women’s soccer and FIFA World Cup analyst in 2005. Her job at ESPN was expanded to include serving as a features reporter and a spokesperson. Foudy is currently one of espnW’s main voices .She  contributes personality-driven features to ESPN studio shows such as SportsCenter and Outside the Lines.

Additionally, in 2007 and 2011, Foudy was the principal television voice (studio and game analyst) for ESPN, ESPN2, and ABC’s coverage of the quadrennial FIFA Women’s World Cup competitions. Foudy made her ESPN debut as a studio commentator for ESPN and ESPN2’s coverage of the 1998 FIFA World Cup from France. She also served as a studio analyst for ESPN’s unprecedented coverage of the UEFA European Football Championship 2008 in the United Kingdom (Euro 08). Foudy worked as a general assignment reporter for ESPN and ABC’s award-winning 2010 FIFA World Cup coverage in South Africa.

Moreover, from 1987 to 2004, Foudy was a midfielder for the United States Women’s National Team, serving as captain from 2000 to her retirement. Foudy, who served as head of the Women’s Sports Foundation from 2000 to 2002, got the FIFA Fair Play Award in 1997 for a journey to Pakistan earlier that year to inspect the working conditions of her then-sponsor, Reebok. Foudy was a four-time All-American at Stanford and the 1991 Soccer America Player of the Year.

She hosts a podcast Laughter Permitted which is a fun, thoughtful, candid conversation with trailblazers about the joy/chaos of life.

Choose to Matter: Being Courageously and Fabulously YOU is Foudy’s book, and she also appears in the HBO documentary Dare to Dream: The Story of the US Women’s Soccer Team.