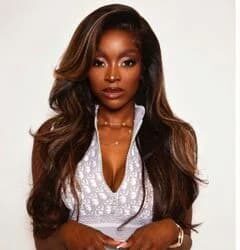 Chelsea Lazkani is a British-Nigerian luxury realtor. She is a real estate agent at The Oppenheim Group. She is one of the new additions on Netflix’s reality show, Selling Sunset.

She was born in 1992 in London, United Kingdom.

Chelsea is the daughter of Segun Adefioye and Elizabeth Adefioye. Her father is an accomplished Architect and Property Developer who heavily influenced her love for real estate.  Her mother on the other hand works as Chief People Officer at Emerson.

Her mother, Elizabeth Adefioye, boundary-breaking career as Chief People Officer at Emerson, provided Lazkani with both the inspiration for what could be possible for her own life but also afforded her the opportunity to travel and see the world, solidifying her love for design, culture, and people. She grew up enamored by real estate, heavily influenced by her father, Segun Adefioye, who is an accomplished Architect and Property Developer.

Chelsea is married to Jeff Lazkani. The couple met on a dating app after Chelsea moved to Los Angeles. They got married in 2017.

Jeff is a Managing Partner at Icon Media Direct, his mother’s media company. He initially joined the company as a Traffic Coordinator before he was promoted to his current position. He was raised by his single mother, Nancy Lazkani and has a sister named Sara Lazkani. He attended the University of San Diego and received his BBA degree in 2005.

After Selling Sunset season 5 hit the screens most people accused Chelsea of faking her accent but she took her time to explain. She addressed the accusations on her Instagram Stories saying her accent maybe all over the place as she has lived in four countries but she later clarified that it was three countries but two different states.

“Guys, the word on the street is my accent is fake. I know, it’s all over the place. But listen, there’s an explanation. I have lived in four countries in my short 29 years of life.

She added that she was losing her accent, “I’m losing my accent and I’m so sad about it, but it’s a circumstance thing, I live here now don’t I?”

Chelsea is a realtor associate at The Oppenheim Group. She has been working in real estate in California since 2017 after receiving her license. She started her career at Rodeo Realty. In her first year, she successfully oversaw more than $10 million in sales, leading her to make her own first home purchase in Manhattan Beach, CA.

Prior to joining real estate, she worked as a business strategist and solar analyst with companies in the oil and gas industry. According to her LinkedIn she worked at NRG Clean Power as a solar analyst and assistant to the Director of Operations. She later joined Applied LNG as a Business Strategist. Some of her roles included;

Chelsea is one of the cast members of Netflix’s Selling Sunset. During an interview with PEOPLE she said; “I think having the support of my husband and my family really essentially prepared me to take on this big role and this big opportunity. But for me personally, I saw this as an opportunity to really open doors in an industry that has lacked diversity and where minorities are underrated.

I feel like with great opportunities comes great responsibility. This was kind of my time to give back and to educate and really mentor and push forward Black women in this luxury sector in real estate. So just knowing that I’ve got a greater purpose kind of prepared me for this.”

Where Is Chelsea Lazkani From?

Yes, Chelsea is really British. She was born and bred in London. She lived in London for 21 years.

Does Chelsea join the Oppenheim Group?

Who is Chelsea from Selling Sunset mom? – Chelsea Lazkani Mother

She is an ambassador for the Network of Executive Women, serves on the board of the Society for Human Resources Management, Skills for Chicagoland’s Future and is a member of The Economic Club of Chicago.

She was also named o the “2021 Elite 100 Extraordinary Black Women” changing the face of Corporate America for her role in leading complex transformations by addressing systemic racism in the workplace, building morale through innovative programs and sustaining profitable bottom lines. She was recognized among the “2019 Most Powerful Women in Corporate America” by Black Enterprise and was a 2018 recipient of the “Women Worth Watching Awards” by Profiles in Diversity Journal.