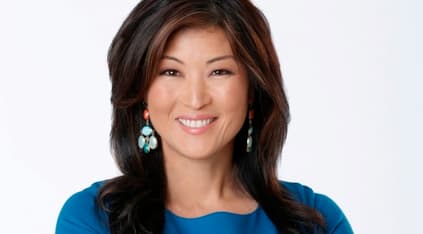 She has a height of 5 feet and 4 inches.

She attended Marian A. Peterson High School for a year and joined Adrian C. Wilcox High School where she graduated in 1983 since her former school was changed to a middle school. She was a nationally ranked swimmer at a young age. In 1987, she graduated from Stanford University with a Bachelor of Arts in political science and communications. At Stanford, she was awarded the Edwin Cottrell Political Science Prize.

Juju was born in Seoul, South Korea and immigrated to the United States in 1969. She was raised in Northern California.

She belongs to Korean ancestry.

She has one sister.

She married Neal Shapiro on December 2, 1995. Neal Shapiro is an award-winning producer and media executive with a 30-year career spanning print, broadcast, cable and online media. He is the President and CEO of WNET. He joined the company in 2007. He previously served as the President of NBC News. He also worked as an executive producer of Dateline NBC from 1993 to 2001.

Prior to joining NBC, he spent 13 years at ABC News, where he was a writer and producer for PrimeTime Live and World News Tonight.

Juja practices Judaism. She converted to Jewish after getting married to her Jewish husband, Neal Shapiro. In an interview, she revealed she had told Shapiro she would never convert to Judaism, though she was open to raising their children as Jewish. Eight years later she converted.

“A good eight years went by, where I would go to high holiday services, and do the seder and I really enjoyed Yom Kippur of all holidays, all that sacrifice and inward spiritual thinking. One day I said to my husband, ‘I think I’m going to convert.’ And he literally did a spit-take. Kind of as of hit by a metaphorical bolt of lightning.

When I examined why, I really felt like I wanted it for me. I wanted that kind of clarity and perspective that Neal had. He just felt like he had a stiffer spine and a clearer outlook and I wanted that…I aspired to that and it turned out to be an amazing experience.”

Juju Chang and Julie Chang are not related, they just share their surname and are both Korean. Julie Cheng whose full name is Julie Ju-young Chang is also a journalist. She is an entertainment anchor for Good Day LA on KTTV and Fox 11 Morning News.

Juju serves as a co-anchor for ABC News’ “Nightline.” She also reports regularly for “Good Morning America” and “20/20.” She previously anchored “Good Morning America.” She joined ABC News in 1987 as an entry-level desk assistant and rose to become a producer for “World News Tonight.”

During her tenure with ABC News, she has been recognized for her in-depth personal narratives set against the backdrop of pressing national and international news: from natural disasters to terrorism and racial equity.

She has covered major breaking news including extensive coverage of the COVID-19 pandemic: the science, the economic fallout, the racial disparities, the impact on hospital ICUs and essential workers.

She has also covered mass shootings and the myriad issues raised by shootings at the Pulse nightclub in Orlando, at the concert in Las Vegas and at the Sandy Hook school in Newtown, Conn.

She has reported on global issues and gender-based violence, including a trip through Central Africa on the front lines against Boko Haram and #bringbackourgirls. She traveled to Honduras for “Femicide: the Untold War,” an eye-opening look at rampant violence against women.

She did a report “Trans and Targeted” on violence against transgender women of color across the country caps a series of her stories on LGBTQ+ issues.