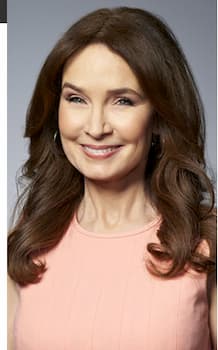 Jean Ann LeGrand-Casarez is an American media personality and lawyer working as a  legal correspondent for CNN and HLN based in the New York bureau. She previously worked as a correspondent for truTV (formerly Court TV) and was the weekend anchor and reporter for KOLO-TV in Reno Nevada as well as the City Hall reporter and fill-in anchor at KENS-TV in San Antonio, Texas.

Casarez graduated from the University of Southern California and received her Juris Doctor degree from Southwestern University School of Law in Los Angeles.

Jean hasn’t revealed much information about her parent but she considers herself Mexican-American as both of her parents were born and raised in Mexico. She posted a photo of her mother on her twitter page with a caption, “Honoring the Lady that has been the greatest example to me in life…my Mother. #HappyMothersDay”

Honoring the Lady that has been the greatest example to me in life…my Mother. #HappyMothersDay pic.twitter.com/sNHLwfmmvQ

It’s not known if Jean has any siblings.

Jean is married to John Casarez. She hasn’t given any further information about her husband but  posted a picture of her anniversary dinner with her husband on July 20, 2014 on Twitter.

It’s not known if Jean and her husband has any children.

Jean Casarez is a correspondent for CNN covering a wide variety of stories for the network including legal and crime, investigation and breaking news. She is based in the network’s New York bureau and broke the news to the country of 2017’s mass Las Vegas shooting with her overnight reporting from the Vegas strip. She also covered the breaking news of New York’s 2016 Chelsea bombing case and has been the network’s correspondent for the Larry Nassar sexual assault case and sentencing hearing, Bill Cosby’s arrest, trial and conviction for indecent sexual assault, West Virginia’s chemical water spill and O.J. Simpson’s release from prison. She is currently involved in reporting the criminal case against Harvey Weinstein.

Jean found and pursued the case of a man who is in the midst of a 70-year prison sentence for breaking 13 bones of his infant son. From day one James Duncan proclaimed his innocence. Casarez took an in-depth look at the evidence getting interviews with Duncan himself in prison and key players on both sides. Those interviews became a prime-time documentary for CNN “Broken Bones…Shattered Lives.” The court has now ordered for Duncan to have a hearing this fall to determine if his verdict should be overturned based on new evidence that his son actually had metabolic bone disease.

Casarez has done other long form work for the network including Jon Benet’s Murder, the Drew Peterson case, Bill Cosby’s rise and fall along with an upcoming documentary on the 40th anniversary of the arrest of serial killer John Wayne Gacy and also covered court proceedings involving Anna Nicole Smith in Florida and the Bahamas covering the International legal aspect of Smith’s untimely death. In 2011, she flew to Lima Peru for the CNN networks to cover the arrest of Joran van der Sloot in the murder of a Peruvian college student. While there she and her crew were able to obtain access to Peru’s maximum-security prison Castro Castro, interviewing inmates and Peru’s Director of Prisons about the country’s correctional system.

Prior to joining CNN, she was a correspondent for Turner Broadcasting’s network Court TV, joining the network in 2003. In her role, she covered high profile legal proceedings around the country including O.J. Simpson’s kidnapping trial, the civil rights trial of Edgar Ray Killen, Kobe Bryant, the murder of Jon Benet Ramsey, Scott Peterson’s sentencing verdict and the criminal trial of Elizabeth Smart’s kidnapper Brian David Mitchell. She was also the weekend anchor and reporter for KOLO-TV in Reno Nevada and produced the newsmagazine show First Edition and served as the City Hall reporter and fill-in anchor at KENS-TV in San Antonio, Texas.

In addition to her legal background and journalism career, Casarez, under the name Jean LeGrand, has recorded six albums of Tejano music in Spanish for the International divisions of CBS and Capitol EMI Records, thus touring throughout the U.S. and Mexico;

Casarez is a member of the Nevada and Texas bars and a licensed attorney in the U.S. Southern District Court of Texas. While in law school, she won first place in a statewide Moot Court competition and assisted in preparing a Writ of Certiorari for the United States Supreme Court. She also clerked with the Nevada firm of Gallagher and Tratos while a law student.