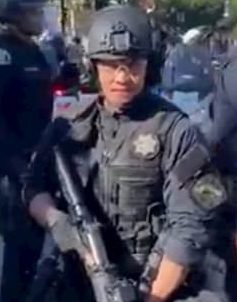 Jared Yuen is a San Jose Police Department officer badge number 4362 who was seen getting excited and smirking his lips during the protest in San Jose, California. He was also seen in another video telling a protester ‘shut up bi*ch’.

THESE ARE THE OFFICERS I WAS TALKING ABOUT THEY WERE WAITING WITH EXCITEMENT pic.twitter.com/n4GZhZBLGW

He belongs to Asian descent.

Jared began trending on Twitter after a video on Twitter went viral because he looked a little too hyped about getting it on with the protestors.

jared yuen u are a disgrace to the asian community how dare u stand on the other side & even have the AUDACITY to act like you’re gearing up for a game with a smirk on ur face u mf- take away your uniform & badge whats left of u? u disgusting piece of shit pic.twitter.com/ExITt8I5nA

His name is Jared Yuen, police officer in San Jose.
Report him.
Also how you getting paid over 200k a year to be a killer?
Make it make sense.
ALL COPS ARE PIGS https://t.co/DfsqdIEgIn

People are filing complaints with the San Jose Police Department hoping to get him fired but at the time of writing this article, he has not been fired nor has the SJPD released a statement about the same.

This video probably frustrates me the most. You can tell this guy is out here to have fun while harming the protesters. Dude is so high on his power trip.

Strip him of his uniform and weapon and he’s just a short weak little man.

fire Jared Yuen. This is obviously a man who enjoys causing other people harm and should not be in a position to protect people. hold your officers accountable

According to screenshots posted a Twitter a person texted him asking if he was the man on the video to which he confirmed it was him but claimed the video was taken out of context and it was just ‘the heat of the moment’ and added ‘I apologize.’ 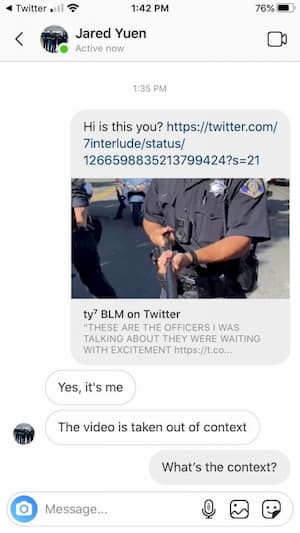 Yuan had previously appeared in the media again but at the time it was for arresting a suspect who had rammed a stolen car twice into a SJPD patrol car.

According to the article by NBC, the suspect Juan Aguilar was arrested on suspicion of ramming a police vehicle on the morning of Oct. 25, 2016, prompting two officers to shoot at him.
Three officers were on foot patrol shortly after midnight in the 400 block of Wooster Avenue west of Highway 101 when they heard over the police radio that a stolen car was headed their way. One of the officers, who was later identified as Jared Yuen, had just entered his patrol vehicle when he saw the stolen car with Aguilar allegedly inside. Aguilar allegedly changed gears and backed up into a cul-de-sac.

Yuen was left with a minor injury to a lower extremity, he was transported to the hospital and then released.