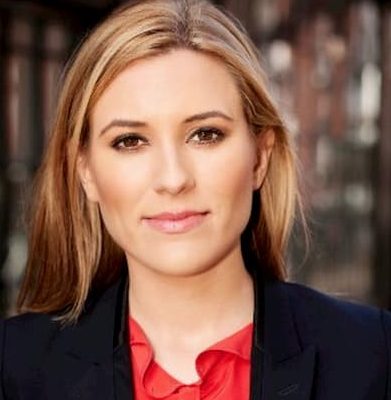 She has a Bachelor of Arts degree from the University of California Berkeley’s Haas Undergraduate Program having graduated with high honors, Phi Betta Kappa.

Her mother is known as Irene but the name of her father is unknown. Her father was a Southern Gospel lead singer and helped to charter The Old Savannah City Mission which feeds, educates, and rehabilitates men and women in the Savannah area. Her mother was a violinist.

Happy Mother’s Day. I’m so privileged to call you “mom”. Love you beyond.

She has one sibling, a brother although his name is unknown.

#Sibling vibes in #Paris. So good to see my bro this side of the Atlantic !

Erin is married to physician Ken Peckham, the couple got married during the spring of 2009 in New York City. Ken was previously married and is a father to two daughters Emma and Catherine.

Erin has no biological children but is a stepmother to Emma and Catherine, the daughters of her husband from a previous marriage.

She began her career in journalism in 2003 as a CNN intern, she later moved to CNN Atlanta where she worked as a researcher on the international assignment desk, before her switch to London in 2010.

Prior to becoming a full-time correspondent, McLaughlin worked on many high profile stories as a producer. She was part of the Emmy-nominated team for CNN’s coverage of the Detroit attempted terror attack in 2009, and produced coverage of stories as diverse as the Anders Breivik trial in Norway, the European Union’s Greek bailout, the 2011 London Riots, and the trial of Saddam Hussein. She also helped coordinate CNN’s coverage of the wedding of the Duke and Duchess of Cambridge, William and Catherine.

While based in London she covered a range of stories in the UK and Europe, including Britain’s decision to leave the EU, the trial of Amanda Knox and Raffaele Sollecito ‎and the Conclave of Pope Francis, with whom she also traveled on his visit to South Korea.

She has also covered aviation disasters such as the search for MH370. She was inside Sharm el-Sheikh’s security screening area following the Metro Jetplane crash. She also reported from the French Alps for the Germanwings crash, where it was revealed the plane’s co-pilot purposely crashed the plane.

In October 2019 she joined NBC as a Foreign correspondent and NBC News Correspondent. She has appeared on The Today Show, Sunday Today with Willie Geist, NBC Nightly News with Lester Holt and Weekend Today.

Reporting from Seattle has been eye opening. While in LA, I’ve been in quarantine, going out only for essentials and conducting interviews over the internet. Actually getting out and seeing some of the new reality has been startling. This is not going to end soon and we may never be the same. Ive been focusing on taking a moment to appreciate every freedom I still have. COVID-19 has taught me many lessons of gratitude. My heart goes out to all of victims.