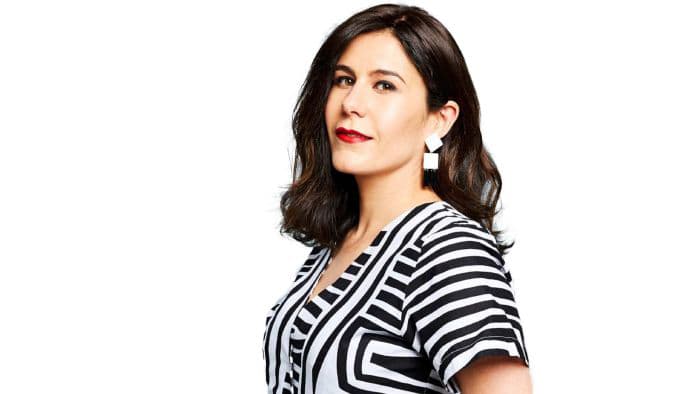 Jan Fran is a journalist and presenter from Australia who has worked for the Special Broadcasting Service (SBS). With Marc Fennell, she co-hosted the current affairs and satirical TV show The Feed and The Project and the podcast The Briefing and The Pineapple Project and The Few Who Do.

Her standing height has yet to be known.

Her parents’ names are not yet mentioned except that they are a Maronite-Christian family. They moved to Australia when Jan was only four years old. She was brought up within a community that had fled conflict in Lebanon during the 1980s in Bankstown, a suburb in Sydney’s southwest.

Jan is married to Al Morrow. Morrow and Jan are said to have been engaged a year after their first meeting. In addition, the pair married on January 17, 2015, in a property just outside of Hobart.

nHe posted a snapshot of the two of them on their wedding anniversary, January 17, and wished Jan a Happy Anniversary. Furthermore, the couple looks to be in a tight relationship and claims to be open and honest in their interactions.

Who is Al Morrow?

He is a director at Reddit and is in his 40s or 45s. Morrow is an enthralling storyteller known for his unusual wit and powerful visual flair.

Morrow began his illustrious career at ABC Television, where he directed, produced, and programmed for hit shows like The Chaser, Rage, and Triple J TV.

Details of whether she has kids are not yet known.

She’s most recognized for her work on ABC’s The Project and The Feed where she co-anchors with Marc Fennell, as well as podcasts. She is a journalist, TV host, and social commentator who has won Walkley awards.
Francis made the decision to pursue a career in the media during her first few years in Australia. Francis began her career as a foreign correspondent for SBS’s Dateline and Insight programs, for which she received a Young Walkley Award nomination in 2012.

Jan is also the founder, writer, and host of The Frant, an online opinion program that has received over 25 million views on social media and garnered Jan a Walkley award for Best Commentary, Analysis, Opinion, and Critique in 2019.

For The Guardian, she is now working on The Frant. Jan writes a fortnightly column for The Sydney Morning Herald and The Age and has featured on Q&A, The Today Show, Studio 10, ABC Breakfast, The Latest, and The Drum as a pundit.

Additionally, Jan has worked on documentaries all around the world, shooting and producing them.  Jan has lived in Lebanon, France, Bangladesh, and Uganda, and can communicate in three languages, the majority of which she fluently speaks. Hachette will publish her memoir Of Middle Eastern Appearance in 2022.

Jan Fran is an ambassador for Plan International Australia, where she campaigns for women and girls. She was nominated for a Walkley Award for Women’s Leadership in Media in 2018 for her excellent reporting on women’s problems.

Wil Anderson is the host of The ABC show Question Everything, which he co-hosts with Jan Fran. It starts on Wednesday at 8.30 p.m. The eight-part series features a rotating group of comedians who examine the events of the week and separate the unbelievable from the ridiculous. It is the culmination of a more than two-decade career in comedy, radio, and television.

Francis has been a guest presenter on Network Ten’s The Project and has hosted TV coverage of Tropfest.