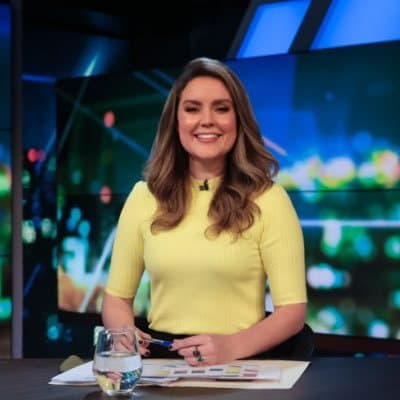 Georgie Tunny is a renowned reporter and a producer working at  Flash from ABC where she was a presenter of News Breakfast. She was also a sports presenter and reporter with ABC.

Tunny was born on 24 January 1991 in Brisbane, Australia.

In terms of her parents, she has yet to make any public statements about them. There is no information on her relatives, cousins, siblings, or other family members at this time.

Georgie is not yet married but is at the moment dating Rob Mills. They began dating in 2018. Rob sent her a message on her Instagram and convince her he was not crazy.

They used to spend much of their time together in the mornings when they first started dating. Georgie was working on a morning show at the time, while Rob was busy with his evening shows.
Rob was instantly accepted into Georgie’s circle and was warmly greeted by her coworkers and frequently seen at her work functions.
In addition, in 2020, the charming pair moved in together. They are residing in Melbourne, Australia. The couple isn’t afraid to post images of themselves on social media, and they frequently profess their love for one another on their Instagram accounts. Rob celebrated his 39th birthday on June 21 by sharing an amazing photo with his girlfriend.

Who is Rob Mills?

Rob Mills is an Australian actor, singer-songwriter, and television personality. He was one of the inaugural season’s finalists on Australian Idol. He co-hosted the late-night quiz show The Mint and was a regular singer on the game show The Singing Bee.  He is dating Tunny.

She has not revealed whether she has any children yet.

Georgie has been a member of ABC News Breakfast’s presenting team for four years, serving as a Sport Presenter, Weather Presenter, and Co-Host during the 2020 Bushfire emergency coverage and the COVID-19 pandemic.

She has been employed by ABC Melbourne as a Sports Reporter and Producer and has completed a tenure as Executive Producer of Offsiders: Summer Series. Georgie has been a regular host of The Project, Channel Ten’s primetime news and current affairs show on ABC.

Georgie Tunny, a journalist for ABC’s News Breakfast, left the network on  November 2021 after eight years to join Flash, a news streaming service. She joined the host of the daily ‘News Flash’ portions after more than a decade of reporting across news, sport, and entertainment for ABC, The Project, and FOX Sports.

Tunny has served as a Panelist at The Project (formerly known as The 7 PM Project from 2009 to 2011), an Australian news, current affairs, and talk show television panel show that airs on Network 10 on weeknights across Australia.

Her estimated net worth is $ 2 million dollars.