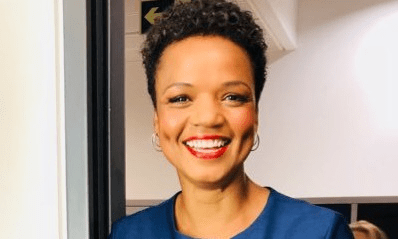 Lukwesa Burak is a media personality and a former weather presenter serving as the news presenter for BBC News. She also worked for Al Jazeera English, Sky News and Africa Edition on eNCA, based in South Africa.

Burak is a Zambian by nationality.

Previously, she joined the Royal Air Force Air Training Corps, but had to leave after injuring her leg during a game of football. She also learned to speak French while she was in Switzerland for a year.

Growing up she was close to her father who used to take her on fishing trips in the Zambezi River. On one occasion, she capsized and was hospitalized for a month with malaria. Her family moved to England from Zambia when she was eight years.

There is no information about her parents names.

She is married to Neil Barnes. Much information about her marriage she’s kept secret.

She has two kids. One is a daughter named, Gigi.

Previously, she worked as a broadcast assistant for BBC weather. She began by broadcasting as a relief forecaster for BBC regions and nations. She was eventually confirmed as a permanent member of BBC East Midlands’ forecast team and later a lunchtime news anchor. In 2006, Burak left BBC for Sky News where she used to present Sky News overnight as from midnight to 0600. Her programmes at the time were Sky News on the Hour (0100-0300) and Sky World News (0300-0600). She left Sky News in 2012 but returned in 2013.

In 2008, she was featured on the cover of the second issue of UK Zambians’ Lifestyle Magazine. In the same year, she was appointed as the patron of the charity All-Star Kids (1079911). She is also an ambassador for No More Malaria UK and the director of Gidore, a hair products company.

Burak joined South Africa based eNCA in August of 2012. She relocated to South Africa because her husband had also landed a new job there. She was interviewing guests as opposed to dealing with prerecorded material at eNCA. From there, she went back to Sky News then Al Jazeera before returning to BBC.

Her net worth is close to $1 million.