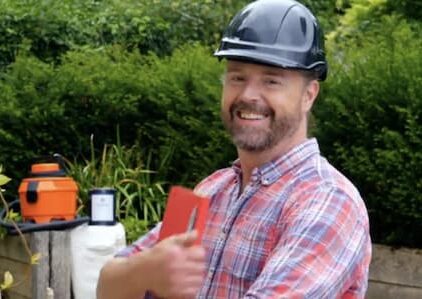 Gordon Whistance is an interior, production designer and television personality. He is known for presenting BBC One’s Trading Up, Housecall, House Invaders and Changing Rooms.

Whistance is the son of Patricia although the name of his father is unknown. His mother is a former legal secretary. His father died when he was 16 years old due to lung cancer.

Gordon keeps his personal life very private, his marital status is unknown. He has also not talked about his sexuality.

Gordon is a self-taught interior designer whose love for design stemmed from an early age. He became interested in design at The Bishop of Hereford’s Bluecoat School where he excelled in art. He used to draw designs for furniture. He left his home and moved to Northampton at the age of 17.

He founded his company Gordon Whistance Ltd. In 1995 he worked on a 16th-century French chateau. He joined a TV crew while working on the chateau as a production designer. This opened other opportunities for him.

As a production designer, he has worked on several shows such as; Reel Life, Lead Balloon, Chelsea Flower Show, Eyewitness, Stanley Baxter: Now and Then, Lee Evans, School of Comedy, Scallywagga, Spacehopper, What Not To Wear USA, Rich Hall’s Cattle Drive, Secrets of The CIA, Smirnoff Ice, Billy Jo, SOLD, Blood on her Hands, The Blooding, Nothing but the Truth, Home Front in the Garden, Jevan, The Promise, and Rose Cottage.

Gordon was a designer on BBC’s DIY SOS. He has also appeared on Trading Up, Housecall, House Invaders and his latest appearance was on Nick Knowles’ Big House Clearout in August 2021.