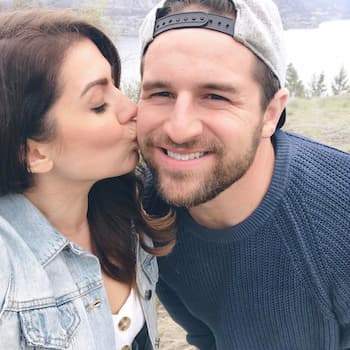 He is the son of Paul Pasutto and Melissa Pasutto. His father is the president of Innocept Real Estate and Development, a full-service boutique real estate outsourcing firm, and his mother is the corporate culture advisor. He has a brother known as Matthew.

Pasutto is not married but is engaged to Jillian Harris since 2016. Jillian has said that age was a big factor in the relationship as Justin is 10 years younger.

“When I met Justin, I found out he was 23, and I was 32. I was like, ‘What are we gonna do? I want to have babies and you’re not ready to have babies at 23. This is a disaster.’ We dated for a good four years. I was turning 36 and we talked about engagement a lot. We had a really rough relationship because of our age difference and also the difference in our careers and where we were.”

She also added that they struggled in the relationship and that was the reason Justin wasn’t proposing.

“We really struggled in our relationship and I think that’s why we never got engaged, because we were both like, ‘I don’t know if we’re going to get through this.’ One day I said to him, ‘Honestly, I know you haven’t proposed yet, but do you think I’m going to be the one you’re going to have babies with?’ He was like, ‘Yes.’ I said, ‘Because my clock is ticking, which means your clock is ticking.'”

Jillian Harris is a designer and television personality. She is the Founder and Creative Director of Jillian Harris Design and The Jilly Academy, Co-Author of Fraiche Food Full Hearts and Co-Founder of The Jilly Box. She was a designer on Extreme Makeover: Home Edition. She hosted one of Canadian TV show Canada’s Handyman Challenge, which aired in 2012. She appeared on Love It or List It: Vancouver.

She was a contestant on the 13th season of The Bachelor, where she was the second-runner up. She was the lead on The Bachelorette season 5 and got engaged to Ed Swiderski but they ended the engagement in July 2010.

Justin met Jillian in line for a bar. During an interview on ‘Bachelor Happy Hour’ Jillian talked about the first time they met explaining;

“I was like, ‘Oh, he is cute! He’s 10 years younger than me.’ I was like a black widow and this is my next victim. We started chitchatting and I could tell he was raised well.

Normally what I would do with a nice guy like that is I would sabotage it before the first date. I would be like, ‘He’s too nice.’ I was going for the bad guy because I knew how to handle them. I already set myself up for failure and I didn’t want to get myself heartbroken again. I was self-sabotaging myself the whole time in terms of a relationship. That’s all I knew.”

Justin and Jillian have two children together; a son known as Leo George (born on August 5, 2016) and a daughter known as Annie Marjorie Bea (born on September 28, 2018).

He is a former professional snowboarder. While in high school he went to the National Sport School and was playing national level rugby and racing boardercross. He was on Team Canada until he was 16 years and was traveling for rugby in the summer and snowboarding in the winter. Things got hectic and he had to choose one and he chose to pursue snowboarding as it was his dream to make it to the Olympics.

When he started competing on a professional level, he moved to Canmore from September to April. He then made it to the National program and moved out to Whistler. He ended his career due to multiple injuries.

While competing in Argentina he was creamed by a skier, his ski cut through his gear and his skin. Two months after, he went to Austria, where he cracked and broke 3 ribs. Later he again took another slam and ruined his shoulder and dislocated his index finger, then the month after that he got his 6th concussion in 5 years … this was the year leading up to the Olympics. At this point he knew if he hit his head one more time, it would be bad news so he decided to quit.

What Does Justin Pasutto Do For a Living

After quitting snowboarding he founded Scrub Captain, a boat detailing company, which he says was meant to help him transition from snowboarding and the start of school. He run the company for several years before joining his father’s company Innocept Real Estate and Development in 2016 as part-time but ended up turning full-time. He serves as an associate development manager.

He is a social media influencer and principal owner of Pasutto Media Inc. He runs his blog and hosts The Justin Show and The Justin Cooking Show.

Justin appeared alongside Jill on ‘Love It Or List It Vancouver’ as Okanagan Project Manager. This was when Jill worked on homes in Kelowna and Kenny was managing the Vancouver homes.