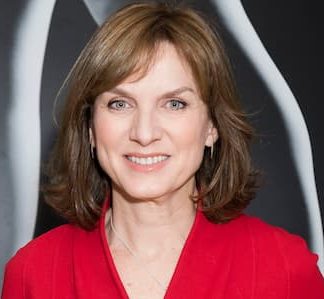 Fiona Elizabeth Bruce is a British media personality working as an anchor for the BBC. She presents the BBC News at Ten and has presented many flagship programmes including BBC News at Six, Crimewatch, Real Story, Antiques Roadshow, and Fake or Fortune? and has been the presenter of the BBC One television programme Question Time.

Fiona attended Gayton Primary School in Wirral, the International School of Milan, and then from the age of 14 until 18 attended Haberdashers’ Aske’s Hatcham College in New Cross, London. She then studied French and Italian at Hertford College, Oxford, and also attended the University of London Institute in Paris.

Bruce was born to an English mother Rosemary Bruce and a Scottish father John Bruce. Her father joined Unilever as a postboy and later became regional managing director of Unilever. Fiona once compared herself to her mum and admitted to feeling guilty about being a working mother,  “She stopped working when she had her first child and never went back,”. “My parents’ set-up was very traditional. I do judge my parenting skills against hers and often find myself falling short. She was always there, but I’m not. Her mother passed on in 2011 in Axminster Hospital at the age of 81.

She was brought up alongside her two elder brothers, Neil Bruce and Alasdair Bruce.

Bruce is married to Nigel Sharrocks, the non-executive chairman of Digital Cinema Media. The duo met at advertising agency Boase Massimo Pollitt. He was the company director while she was working there. They exchanged their marriage vows in July 1994 in Islington.

Fiona and her husband have two children, son Sam who was born in January 1998, and daughter Mia Rose born November 2001. Bruce encountered criticism after her decision to return to work with Crimewatch 16 days after the birth of baby Mia. She explained that she was able to go back so quickly as she was part-time working.

“I’m not some mad career monster. I don’t want people to think I’m setting a terribly bad example here – the last thing I would advocate is women rushing back to work with a baby. I really enjoy doing Crimewatch – I take the baby in, and they’re all really keen to see her. It’s perfectly possible to do, though I have to take someone with me as I obviously can’t hold her when I go on air.”

Bruce joined the BBC in 1990 and she regularly presents both the BBC News at Six and BBC News at Ten, and co-hosted Crimewatch for eight years. She joined the network as a researcher on Panorama and later became a reporter on prime-time current affairs series, including Newsnight and Panorama. For four years, she presented and reported on her own investigative current affairs series, Real Story, which won five awards from the Royal Television Society.

In 2001, she became the first female presenter to be part of the BBC’s general election studio team and she has won three Newscaster of the Year awards from the Television and Radio Industry Club. She has also presented a number of arts documentaries for the BBC including Fake or Fortune? for BBC One which she co-presented with Philip Mould.

Bruce is an honorary vice president of optical charity Vision Aid Overseas (VAO), alongside fellow newsreader Sir Trevor McDonald. In February 2005, she did the voice-over for VAO’s Lifeline Appeal and in 2007 she launched VAO’s Annual Review. Later that year she was one of nine prominent women to take part in the What’s it going to take? campaign for the charity Women’s Aid. In 2009, the NSPCC inducted her into its Hall of Fame in honour of her continued work on their behalf.