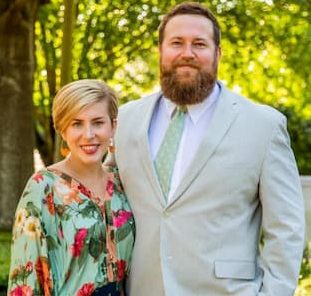 Erin Napier is an American designer and reality television personality. She serves as a host of HGTV’s  ‘Home Town’ and  ‘Home Town Rescue’ alongside her husband Ben Napier. She is a co-owner of Mercantile Co. and Scotsman Co.

Erin stands at a height of 5 feet 5 inches tall.

She has a Bachelor of Fine Arts degree in graphic design from the University of Mississippi.

She is the daughter of Karen Rasberry and Phil Rasberry. Her mother, Karen is a seasoned realtor in Laurel, Mississippi. She was a cheerleading captain when she was in high school, and encouraged Erin to try it out in junior high but it wasn’t the same good fit for her but her mother never forced her to keep doing it.

Erin says that her mother encouraged her to be creative and supported her. “She didn’t like the music I liked sometimes, but she was so proud to see me playing guitar and piano at coffee shops and talent shows. She never missed a show. She encouraged me to be independent, to think for myself, to be unconcerned with the opinions of my peers.”

She nurtured the things that made me different when I was little, and I never departed from it when I was grown. Thank you, mama, for showing me how to be the mama Helen deserves. I love you! ? (photo by @amydickerson_photographs for @southernlivingmag)

Erin has one sibling, an older brother known as Clark Rasberry.

Happy 43rd birthday to my handsome son (pictured on the left) who is a doppelgänger for Paul Walker. Clark is a wonderful Doctor of Physical Therapy and a great dad. And he’s funny to boot! Tune in to Home Town at 8 pm to watch he and “Sister” take on a project. @erinapier @scotsman.co @hgtv

Where is Erin Napier originally from?

Erin hails from the Southern town of Laurel, Mississippi.

Erin is married to Ben Napier since November 22, 2008. The couple first met in December 2004 at Ole Miss (University of Mississippi) where they were both students. Erin was in art school and Ben was studying History. Erin had crushed on Ben from afar before they actually met. Six days after they met Ben told Erin he loved her and wanted to marry her. The couple got engaged on September 21, 2007. Erin shared the engagement story on her blog.

” It was Friday, September 21, 2007. I was preparing for my family to come up for the Florida vs. Ole Miss game, and Ben asked me to come with him to Square Books so he could get a book for a class. It was his birthday weekend. My roommates said they needed to go there too and asked to come along. Ben went upstairs to “look for his book” while I, Mallorie, Jennifer, Rebecca, and Josh browsed the books downstairs. Jennifer handed me a little handmade leather bound book and told me to read it. It was the story of an unlikely couple who met in college and fell in love fast. I had no idea it was about us at first. Then the couple began sounding a lot like us. Then it was us. And I was shaking all over, anticipating what was going to happen. The last page said, “Come upstairs for the rest of the story.” I looked at the stairs and realized Jennifer’s boyfriend Benji was filming me. Since some of you didn’t know us at that point in our lives, you can be there for it now:

I walked up to the balcony where Ben was standing. He took my hand and tried to speak, but he began to cry and so did I. So he leaned down to my ear and whispered this: “You know how much I love you?… And you know I will always take care of you… I talked to mammaw (my grandmother)… and in the words of James Rasberry, ‘I’ve got something for you.’”
Then he got down on one knee and said:
“Will you marry me?'”

On December 7, 2004 @scotsman.co and I met in our college yearbook room about the feature story we were writing about him. I was the design editor and for two years had noticed him, always the center of attention, everyone’s best friend, my biggest crush. December 8, we took the photos for the yearbook. December 9, we went on our first date and he met my mama. December 10, we looked at the Christmas lights in Mason Park. December 13, we decided we would get married someday. It sounds crazy to you, maybe. But it makes perfect sense to me. Click the link in my profile for the journal Big wrote about the night we saw the lights, just like we did tonight with Helen, 15 years later.❤️ #loveweek

Erin has revealed that she battled with fertility as after she was diagnosed with a perforated appendix, she was told that it “wasn’t likely” for her to have children.

“I wanted a family desperately. So that was a hard place to be. It was really difficult and then when it happened, it felt like this huge release. Like, ‘Well, I don’t have to worry about that anymore—that decision has been made for me. So she’s on her way.’ And then it was just joy. It was just absolute joy and it was a wonderful experience and I just don’t know what our life would look like without [Helen] in it.” She told PEOPLE magazine.

Erin is the founder of Lucky Luxe, a blog she started after college to showcase her freelance design work, mostly birthday party invitations and wedding stationery. She did her own wedding invitations using a simple typeface that she and Ben printed on ivory cotton paper in red and blue inks.

A childhood friend was impressed and asked her to create a save-the-date announcement for her own wedding. She printed it on card stock, screen-printed it on ivory handkerchiefs with lace around the edges. She snapped a photo of them and posted on her blog.

She received an email from a woman in New York who had seen her blog and asked her to make something similar for her wedding. She then shared ” the hankies on her blog, and within hours I had a rush of inquiries from customers all over the world, not to mention a call from Martha Stewart Weddings, saying it would be featuring me and my handkerchiefs on its website. Lucky Luxe was launched.”

She then started an online journal, ‘Make Something Good Today’ where she focused on what gave her and people around her joy.

Erin and Ben are the hosts of Home Town on HGTV. The show follows them as they renovate turn-of-the-century homes for first-time buyers, young families, and adults wishing to live closer to grandchildren. Erin’s keen sense of style and a background in graphic design guide the renovations, Ben’s building and woodworking skills preserve and celebrate the home’s history, and by using found materials and old textiles, they keep the character intact but create modern and affordable updates.

The couple was discovered by HGTV executive, Lindsey Weidhorn who had seen a publication by Southern Weddings who had covered their home renovation. They had bought a yellow 1925 craftsman cottage that Erin loved since childhood and they began renovating it.

On November 13, 2019 it was announced they will be starring in the spin-off show ‘Home Town Rescue’ which will premiere in 2021. According to HGTV Erin and Ben will take on an entire town in need of renovation.

“The Napiers will mobilize members of one community to renovate multiple individual homes in the town and upgrade public spaces, such as parks, local diners and/or recreational centers.”

BIG ANNOUNCEMENT: We are taking #HGTVHomeTown on the road to help bring one struggling hometown back to life! If your small town needs restoration and has homes with beautiful architecture that need some love, we want to know about it. Email rescuecasting@rtrmedia.com, tell us all about your town (including photos), and we just might see you in 2020 for a small town revival. #HomeTownRescue (PS. we aren’t done in Laurel!) (photo by @brookedavisphoto)

Erinand Ben have a combined estimated net worth of $5 million.

The Napier’s are the authors of ‘Make Something Good Today’, a memoir that offers a behind-the-scenes glimpse into the struggles and triumphs of a couple that America has come to know and love for their easy humor, adoring relationship, and ability to utterly transform a place into something beautiful and personal.

It is a poignant story of how Erin and Ben took a small, tight-knit town into their own hands (literally) and used ingenuity, community, and authenticity to rebuild a once-thriving American Main Street. And how, by combining Ben’s carpentry skills with Erin’s design eye, Home Town is making it clear that small-town living can feel as big as you make it.

During an exclusive interview with PEOPLE Erin revealed that she battled a mysterious illness for a decade and even threatened to prevent her from having children.

She said that the episodes grew more intense when she married Ben in 2008 as it became two days then three days. At its worst, she would be laid up for a week at a time, unable to move without pain and without any idea what was causing it.

Ben added that they went to the doctors and did countless tests and CT scans never showed anything out of order. “We went through everything, from doctors thinking it might be something really bad like cancer to saying it was in Erin’s head.”

In 2014 Erin was advised by her OBGYN to undergo an emergency exploratory surgery which revealed her organs were all bound together, fused by a tissue that covered everything. She was sent to another surgeon.

During a second surgery, the doctors discovered that she had a perforated appendix. The organ had been bursting and healing itself repeatedly for years. The organ had healed itself, becoming encased in scar tissue that eventually spread “like a cancer” to cover her other internal organs.

“The first time it happened, when I was 19, it just partially ruptured. Not enough to kill me, just enough to make me sick,” Erin said.

Even after removing the tissue and her appendix, Erin was told having children “wasn’t likely,” due to the damage caused over the years.

So that’s it for season 4. We ended with two of our most special episodes ever with the @birddogcafe where my grandmother once lived and Mr. Gary’s path to homeownership. I hope they made you smile. We’ve gotten so many messages and letters from you saying #HGTVHomeTown has helped you feel less alone through the quarantine, that it’s been a respite in troubling times. Thank you for watching and making us feel less alone, too. We’re so grateful. In a week we begin filming season 5, and I already know it’s going to be another special year. (photos by @brookedavisphoto)