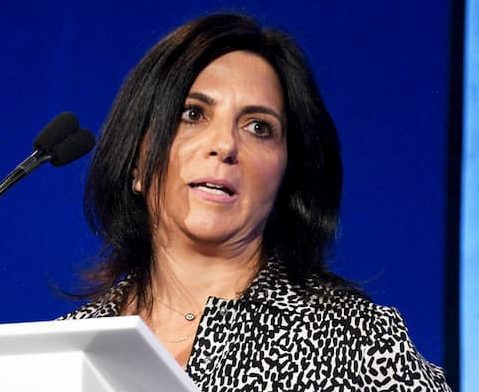 Barbara Fedida is the Senior Vice President for Talent and Business of ABC News.  She was put on leave in June 2020 after a report that she allegedly repeatedly used insensitive, racist and abusive language while addressing staff.

Barbara belongs to who white ethnicity.

She is married to Andrew Brill who is an Emmy nominated reporter and sports anchor at WFSB-TV. He is a former host and reporter at ESPN NY 98.7 FM.

Together with her husband have three children together; Alexandra, Sam and Max.

Fedida is the senior vice president, talent and business at ABC News where she oversees the network’s diversity and inclusion efforts. She joined ABC News in 1989 as a production associate for anchor Peter Jennings. She held various producer roles until she was named director of standards and practices in 2001 and then director of talent recruitment and development.

In 2006 she left ABC News to join CBS News as executive director of talent and then was promoted to vice president of talent and development. She left the network in 2011 and rejoined ABC News.

She has an estimated net worth of $17 million.

On June 13, 2020 Huffington Post published an article alleging that in 2018 Barbara was sitting in a meeting with colleagues discussing fraught contract negotiations with one of ABC’s biggest stars, “Good Morning America” anchor Robin Roberts. Robin wanted more money as part of her contract renewal, and Fedida felt that Roberts had gotten enough. According to a source, Fedida then asked what more Roberts could want and said it wasn’t as if the network was asking Roberts to “pick cotton.”

HuffPost added that that was part of a long pattern of insensitive statements, including racist comments, made by Fedida to people who report to her.

Sources also claimed that Fedida’s alleged misconduct has led the network to spend millions of dollars in confidential settlements with former talent and staff, including at least one settlement related to allegations of racial discrimination.

The story is based on interviews with 34 sources over the course of six months. The sources are current and former ABC News staff and talent, as well as other sources with knowledge of Fedida’s conduct and of the inner workings of ABC News.

Barbara however denied the allegation through a statement released through his lawyer where she said she has been a champion for increased diversity in ABC News.

“Throughout my career, I have been a champion for increased diversity in network news. Building a news division where everyone can thrive has been my life’s mission. I am proud of my decades of work of hiring, supporting and promoting talented journalists of color. And, unlike these heartbreaking and incredibly misleading claims about me, that track record is well-documented and undeniable.”

After the post, ABC News released a statement saying they had put Fedida on administrative leave while they investigate.

“There are deeply disturbing allegations in this story that we need to investigate, and we have placed Barbara Fedida on administrative leave while we conduct a thorough and complete investigation. These allegations do not represent the values and culture of ABC News, where we strive to make everyone feel respected in a thriving, diverse and inclusive workplace.”

A post by Huffington Post alleges that while Robin Roberts was negotiating for salary increment as part of her contract renewal, Fedida said she was been given enough, she then asked her what more she could want and “it wasn’t as if the network was asking her to ‘pick cotton’.”

Huffington Post alleges that despite Fedida being responsible for overseeing ABC’s diversity and inclusion efforts she shows little interest in the National Association of Black Journalists (NABJ). It is alleged that she rarely appears at the NABJ convention.

It is alleged that she sabotaged diversity efforts at ABC with one situation being when the group came together in the summer of 2016 as ABC News was preparing to hold a town hall with then-President Barack Obama about race relations. None of the staffers involved in the planning process were Black which led Black journalists at ABC News to organize the advocacy group.

The group allegedly held conference calls and put together a detailed letter to Goldston. The goals were relatively modest, among them that of having one senior Black producer on every show and interviewing a Black candidate for every job opening.

The letter came to the attention of Goldston and Fedida and according to a source, ABC xecutives dubbed that letter “the Black manifesto.” Fedida used the phrase when talking about the document.

Goldston and the group help a meeting, Robin Roberts was directly involved in all the meetings. In a second meeting with Goldston, when Goldston told Roberts that colleagues were pushing back on some of the proposals, Roberts, who was visibly angry, said, “Were they carrying torches and chanting ‘You will not replace us?’”

Huffington Post claims that in 2016 when Schiavocampo was a leader of Black journalists group Fedida made disparaging comments about her behind her back. In February 2017 ABC News decided not to renew her contract but she didn’t find out until July 2017. After she was told, she was taken oiff air even though her contract was to expire in 2018.

Schiavocampo allegedly approached ABC News through her attorneys with a legal claim that included an allegation of racial discrimination perpetrated by Fedida. She was allegedly given a financial settlement and as part of the deal she signed a nondisclosure and nondisparagement agreement. When reached out for a comment the post alleges she declined to comment.