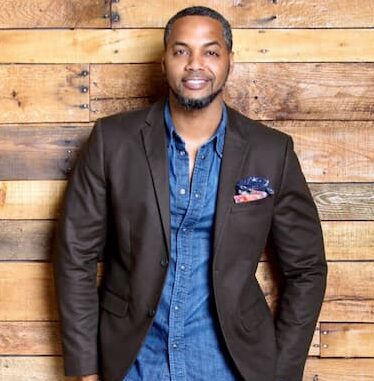 His actual age is unknown but he celebrates his birthday on November 11. He was born and bred in Hempstead, New York but he now resides in Atlanta, Georgia with his family.

Mike stands at a height of around 6 feet 2 inches tall.

He is the son of Teresa James, he has not revealed the name of his father. He has a brother known as Jamel D Jackson who is an entrepreneur and author.

Mike married his wife Egypt Sherrod on September 11, 2010. The couple knew each other while Egypt was on radio and Mike was a popular DJ. Egypt said she turned down his many advances as she didn’t want to date a guy in the entertainment industry but she didn’t know he was a real broker as well. One day as she was flipping a house in New Jersey she needed a contractor and her mentor gave her a referral which turned out to be Mike’s company.

“So, I actually ended up saving her on a rooftop with her foot stuck in a hole cause she tried to do some DIY project, you know. So, I went from being the DJ to saving the day in construction.”

Mike has not revealed the name of his ex-wife but they have a child known as Simone. It seems like the couple had gotten married young as during an interview with voyageatl.com when asked what he would have done differently if he had to go back in time and start over, he said he wouldn’t have gotten married so young.

Mike has three daughters; Kendal Jackson and Harper Skye Jackson from his marriage to Egypt and Simone Nikolej, who was born on September 21, 2001, from his first marriage.

Mike is a professional DJ who goes by the name DJ Fadelf. According to his website, he started off as a singer/songwriter when he was 9, in a group called 4-U with his cousins and then at the age of 11, he transpired to the DJing world. It all began when he was able to mix at one of his Mothers gatherings and at the age of 12 he spun his first wedding. He said in an interview that he was dedicated to the craft and there wasn’t a day that went by that he wasn’t perfecting his skills, studying music & artist, and learning the technology. He added that he knew he wanted to make the art of being a DJ more than just playing music.

He is a member of and Artist of the HipRokSoul band Guitars N Bandanaz and the official D.J for three-time Grammy Award-winning group The Product G&B (known for the hit “Maria Maria” with Carlos Santana and several other gold hits). He has also been the backing DJ for platinum producers The Heatmakerz, HipRock Muzik artist Mitsue, Platinum Producer Boola, Ourbit the Label recording artist Shalone and Black Hand Hip-Hop Artist NAT.

Mike started doing construction as a kid with his grandfather and uncle as they had a construction company and he was always on their job site. He then transitioned into working for a local 28 in New York City. He later co-founded Jackson Draper Renovations with his uncle Mark Jackson.

Mike and his wife Egypt Sherrod are co-hosts on HGTV’s Married to Real Estate. In the show Mike is the contractor/ builder.  The show in the show, the couple showcases the ins, outs, and in-betweens of what it takes to successfully balance marriage and a real estate business. The show was stemmed from their social media uploads. During the early parts of the COVID pandemic when everyone was stuck inside, Egypt was trying to run her business from the kitchen counter, and the kids were being virtually schooled on the other end of the counter. They just started filming all of it, how they were juggling and it went viral. Their team asked them to shoot it and sent it to HGTV who loved what they saw.

The couple is also competing on season 3 of Rock the Block against Leslie Davis and Lyndsay Lamb of “Unsellable Houses,” Jenny and Dave Marrs of “Fixer to Fabulous” and Keith Bynum and Evan Thomas of “Bargain Block.” In the show, each team have just six weeks and a budget of $225,000 to renovate identical properties and morph them into the ultimate suburban oasis that reflects their distinctive vision and breathtaking design.

He has an estimated net worth of $6 million.