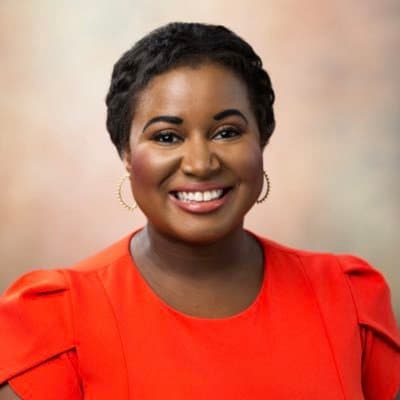 Cyreia Sandlin is an anchor and reporter for WTOC-TV in Savannah, Georgia alongside fellow anchors, Kyle Jordan and Tim Guidera. She worked as a Production Assistant at NBC Reporting in New York City before joining the WTOC-TV news team.

Sandlin attended Bloomington, Illinois’ Central Catholic High School. She enrolled at the University of Missouri in Columbia in 2007 after graduating from high school. Later, she earned a Bachelor’s Degree in Broadcast Journalism and Political Science in 2011 after four years of study. Cyreia more so,  attended Vesalius College in 2010 while still a student at the university, where she studied journalism and European art history.

There are no details or information yet released to the public about her parents.

She is happily married to her husband Hunter Thomas Hall.

Sandlin is the co-anchor of THE News at Daybreak, Savannah’s top-rated morning show, which airs M-F 4:30-7 a.m. She also co-hosted Morning Break, a community-focused lifestyle and news show that airs Monday through Friday from 9 a.m. to 10 a.m. Additionally, Cyreia has also worked as a reporter for both broadcast and digital platforms, pitching, researching, conducting interviews, writing and editing in-depth stories as well as day turn articles.

Along with that, she also worked as an anchor for WFXG Fox 54 News from 2011 to 2014. She worked as a Multimedia Journalist and Anchor for KOMU-TV for a year. From 2010 to 2011, she worked as an Anchor at Newsy and as a Production Assistant for Thomson Reuters for a year. She spent less than a year as an On-Air General Assignment Reporting Intern at WEEK-TV before that.

Moreover, in 2009, she worked as a reporter at KBIA 91.3 FM. She also hosted videos for Newsy, a website and app that provides multi-platform news content. Cyreia has also worked for Thomson Reuters Television News and has worldwide reporting expertise. Cyreia got her start in journalism as an on-air intern at Peoria, Illinois’ 25 WEEK/HOI 19 News.

She is the delighted president of the William Jay Society at the Telfair Museums. She is also a member of the Frank Callen Boys & Girls Club’s board of directors. She has also volunteered with the Junior League of Savannah and Memorial Health’s Children’s Hospital. Cyreia is a member of St. John the Baptist’s Cathedral.

His net worth has been estimated at $1million-$5 million.