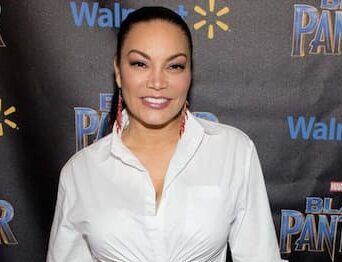 Egypt Sherrod is an award-winning Radio and TV personality, real estate broker and renovation coach. She is the CEO of Egypt Sherrod Real Estate Group and host of HGTV’s “Married To Real Estate.” She previously hosted ‘Property Virgins’ and ‘Flipping Virgins.’

Egypt is African- American. She belongs to Black race.

Egypt has not revealed the names of her parents but she posts her mother on her social media account. She however not talked about her biological father but her stepfather is a commercial realtor.

She was brought up by her grandmother, Ruthie Mae. In a 2019 Facebook post, she revealed that she died many years ago and that she had been angry with her for not attending her wedding and even didn’t speak to her for over a year and a half and then she passed away suddenly only for her to learn that she had dementia, something she hid so well from her family members.

She has a sister known as Tewan and is a nurse by profession.

Egypt is married to Mike Jackson who is a professional DJ and goes by the name DJ Fadelf. He is also a licensed contractor, a realtor, an author, and a fitness trainer. The couple have appeared together on various shows such as ‘Black Love,’ ‘Married to Real Estate,’ and ‘Rock the Block.’

The couple first met in New York, at the time Mike was a popular radio DJ while Egypt was a radio personality working at the WBLS radio station. Mike approached her several times but she turned him down severally as at the time she was healing from heartbreak.

Egypt revealed that she turned him down severally as she was skeptical of dating a person from the music industry and found Mike to be a bit conceited about his charm. She ignored his advances and began to focus on her house-flipping business, which she worked on besides the radio station. She was in need of a new contractor and she asked her mentor for references and to her surprise, Mike was the contractor who turned up to assist her on the project.

After seeing a different side of Mike she changed her mind and they began dating in 2004. They got engaged in 2008 and planned to have the wedding in 2019 in Mexico. Egypt however decided to postpone it last moment as she was skeptical about Mike’s past. Mike was having conflicts with his ex-wife about their daughter Simone which caused Egypt to have doubts on how Simone would adjust with her. They were able to solve the issue and got married on September 11, 2010 at the West Mount Country Club in New Jersey.

Egypt and her husband have two daughters together Kendal Jackson and Harper Skye Jackson. She is also a step mother to Simone, DJ Michael’s daughter from a previous relationship.

During an interview she said that they tried for five years to conceive their second child, but it seemed impossible at the time. Her doctor even recommended a partial hysterectomy to relieve her of chronic endometriosis pain.

She said she found out she was pregnant in a funny way,  “Back in March 2018, I went to pick up my seven year old daughter Kendall and her teacher says to me a “congratulations! I hear you have another little one on the way” and I’m like, “what are you talking about?” I wasn’t pregnant, and as far as I knew at the time, I wouldn’t be able to have anymore kids. So I looked at my daughter like, ‘Kendall, why did you say that to the teacher?’ And she just starts giggling and says, ’cause it’s true,’ and runs off. Fast forward to June, my husband and I are hiking in Morocco, in the Atlas Mountains. I started getting lightheaded and nauseous. My head did not go to pregnancy at all. After the hike, we go to an apothecary because I thought it was because I had switched to a vegan diet, but the healer there kept telling me I was pregnant. I thought, ‘no way.’ But I still took a pregnancy test during our layover in Paris, and sure enough, it said I was pregnant. l was on a plane the whole way like, ‘this is nuts!’ I just cried for hours in gratitude”

During an interview with Essence.com she revealed that her first pregnancy was challenging especially during the third trimester. The baby came early as she had preeclampsia and horrible edema that that was spreading. After giving birth to her first daughter she began experiencing fibroid pain. After she knew she was pregnant with her second child. She went to the same doctor who had suggested partial hysterectomy.

“When I found out that I was pregnant with Harper, I went to the same GYN who recommended a partial hysterectomy to me. She giggled so loud you could hear her in the hallway. With the health issues, I thought I ran out of time. But she did tell me there are women who have very successful pregnancies with fibroid issues. When I went to the maternal fetal doctor, they’d say it was a geriatric pregnancy. I would giggle and laugh. Like, really? Am I the oldest person you’ve seen today? And do you know that this doctor told me that they had a woman, a 60-year-old, who was pregnant with twins? I did have a healthy pregnancy at the end of the day.”

Egypt has had a 20-year award-winning radio broadcast career scoring interviews with the likes of Oprah Winfrey, Prince, Leonardo DiCaprio, Martin Scorsese, and the late James Brown to name a few. By the age of 30, she’d been syndicated in more than 60 cities throughout the USA including major markets such as New York City, Philadelphia, Baltimore and Atlanta.

She got her start in radio while studying at Temple University. She was working as a reception for the college’s public radio station when the production director of the radio station said she was ready to audition for a radio slot. At the age of 18, she was hosting a Jazz radio show. She then got her first, full-time job in radio as a music director becoming the youngest music director in the country, in Philadelphia at age 19.

She was the radio personality for New York City’s WBLS 107.5, where she interviewed Prince, Tyler Perry, and Oprah.

She worked as the midday host of WVEE V-103 in Atlanta. She left the job after she felt being overwhelmed with the demands of her family life and career, as well as about postpartum depression.

She has made recurring appearances as the home buyers/sellers “go-to girl” on NBC’s Today Show, CNBC, FOX, CNN, HLN as well as being featured on Fast & Company, Yahoo, Homes.com, Rolling Stone, Black Enterprise, and a host of other publications and digital platforms.

She is also a speaker and moderator, she hosted the stage at Oprah s “The Life You Want Tour”, and countless business conferences.

Egypt is a licensed real estate expert. She joined real estate while still working on radio. She bought her first property at the age of 24, a dilapidated, three-family home which she flipped and profited from it.

“I used to hear [from them] that real estate was the foundation of wealth,” she said. “I bought some dilapidated homes in the tri-state area, and after I fixed up my first house, I got bit by the real estate bug. I was making more money flipping houses than I was in my day job. I thought, let me take the middle man out [and become a realtor], then I can sell my own properties and keep the commissions.”

She is licensed in two states and is also the real estate columnist for Atlanta Magazine’s HOME and the Atlanta Business Journal.

She is the CEO of Egypt Sherrod Real Estate Group at Keller Williams Realty Cityside. Her roles include counseling modest first-time home buyers to quarterbacking the listing/marketing of homes owned by corporate leaders, celebrities, physicians and investors throughout Atlanta.

Egypt and her husband Michael, are co-hosts of HGTV’s ‘Marrie to Real Estate.’ in the show, the couple showcases the ins, outs, and in-betweens of what it takes to successfully balance marriage and a real estate business. The show stemmed from a the “Ask Anything” videos they used to do on social media. A few of the videos went viral and their team asked them to put it “‘put it together into a reel, and take some of your real work footage and some of your TV footage you’ve done, and let’s see what we can make out of this.’ And we did that, sent it to HGTV, and they saw the same thing that our team saw, and that is how our show eventually went into development.”

Sherrod is a published author. She published her first book Keep Calm . . . It’s Just Real Estate: Your No-Stress Guide to Buying a Home in 2015. The book was nominated for an NAACP Image Award. In the book she demystifies the home buying experience for first-timers as well as relocaters, with a touch of sass and brilliant organizing tips and lists.

Egypt is the founder of Egypt Cares Family Foundation. The foundation aims to provide resources and motivation that support families on their journey to financial literacy, health awareness, higher education and successful communication within the family unit. The foundation provides workshops, seminars, scholarships and community outreach programs designed to foment stronger families.