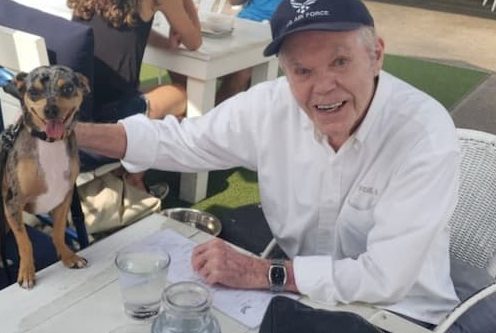 Dick Goddard (Richard D. Goddard) is a former American television meteorologist, author, cartoonist, and animal activist. He served as the evening meteorologist for FOX 8 for over five decades. He holds the Guinness World Record for the longest career as a weather forecaster.

Goddard attended Green High School, he later joined the United States Air Force and took classes on meteorology. He graduated from Kent State University where he majored in drama and broadcasting.

Dick was the only child of his parents. There is no public information about his father but his mother Doris died in 1996.

Goddard has been married twice. His first wife was known as Julie Ann Cashel but she died in 1996. In December 1997 he married his second wife, Amber Williams. The marriage ended with a divorce in 2004.

Dick is a father to a daughter known as Kimberly Goddard who is a graphic designer and an animal advocate.

Goddard began his career in meteorology in the Air Force in 1949, his most notable assignment at the time was forecasting for atmospheric nuclear weapons tests by the United States Atomic Energy Commission in the Pacific.

In 1961 he joined KYW-TV (now WKYC-TV) in Cleveland as a weather presenter. In June 1965 he moved to WRCV-TV in Philadelphia, this was after Westinghouse was allowed by the FCC to reverse a station trade with NBC in 1956 based on coercion in order for Westinghouse to retain their NBC affiliations.

He once said in an interview that his first time on air he was so nervous his voice went up. “I’ve flown in a hurricane I was on that first H-bomb test. At 12, a tornado came by the farm in Green [Ohio]. I’ve flown upside down with the Thunderbirds. That was no big deal. But the first time I went on the air, I was so nervous, my voice went up enough octaves to make Frankie Valli sound like he was singing bass.”

Goddard joined Fox 8 (WJW-TV) in 1966 as a chief meteorologist where he remained until his retirement. He hosted WJW’s version of Bowling for Dollars, a syndicated franchised game show from August 1977 to January 1979. He also appeared in numerous skits on WJW’s popular Big Chuck and Lil’ John Show.

Dick worked as the official statistician for the NFL’s Cleveland Browns home games. WJW carried Browns games until 1970 and later the games moved to WKYC. Goddard held the position from 1966 until 2011.

“Dick Goddard to Cleveland is like the Dick Clark to the whole United States. We all watched him growing up, we all love him, and will truly miss him. Has been my most trusted weatherman all of my life. I’m so sorry to see Mr. Goddard retire, but he deserves it and I wish him well! Our family holds you as a National Treasure in both weather and animal matters.”

Dick estimated net worth is $2 million.

Goddard has been sick since January after a bout with pneumonia.

Dick died on August 4, 2020 at the age of 89, his death was confirmed to FOX 8 by his daughter Kim. He told the station that her father died on Tuesday morning.

She also wrote on Facebook, “My HERO, my DADDY, THE GREATEST ANIMAL LOVER is now an ANGEL”