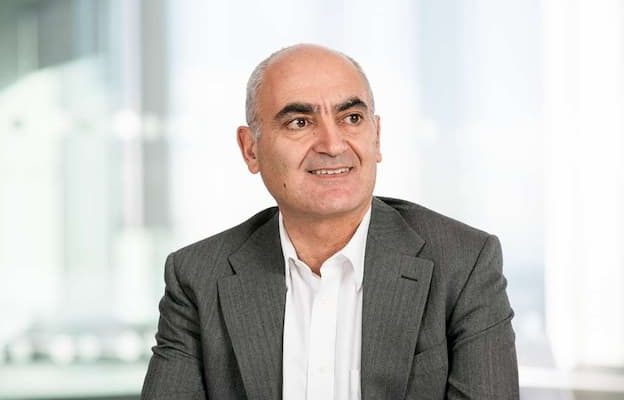 Moncef Slaoui is an immunologist who served as a former chairman of vaccines at GlaxoSmithKline and head of Pharma R & D.  In May 2020 he was appointed by President Donald Trump as the chief adviser of Operation Warp Speed, the government’s effort to speed up the development of a vaccine for the coronavirus.

Moncef is a Moroccan, Belgium and American national.

Slaoui has a Ph.D. in Molecular Biology and Immunology from the Université Libre de Bruxelles in Belgium. He has a doctorate from Harvard Medical School and Tufts University School of Medicine in Boston.

Dr. Moncef is married to Kristen E. Belmonte Slaoui who is the Vice President and Head of Business Development for GlaxoSmithKline’s (GSK) Pharmaceuticals Commercial Portfolio. She joined GSK’s Business Development team in 2006. She previously held a position in Respiratory Drug Discovery.

She graduated from Gettysburg College with a Bachelor’s degree in both Biology and Classical Studies. She earned a Ph.D. in Physiology from The Johns Hopkins Bloomberg School of Public Health. She completed an NIH Post-Doctoral Fellowship at the University of Washington.

Moncef is an immunologist. He was a professor of Immunology at the University of Mons, Belgium and has authored more than 100 scientific papers and presentations.

Moncef has a passion for vaccine development as it is personal for him. His sister died from whooping cough, an ­immunizable disease, while they were growing up in Morocco. He is credited for a cervical-cancer vaccine and a pneumococcal immunization. In 2015 he won European approval for the world’s first malaria vaccine.

Moncef is a former chairman of GlaxoSmithKline (GSK) global vaccines and Head of Pharmaceutical R&D. He joined the company in 1988 as a bench scientist.

Between 2006 and 2015 he was Chairman of GSK’s Pipeline Investment Board
(PIB) and served as a Director of GSK from 2006 to 2017. He also serves as Chairman of the Board of Galvani, a bioelectronics-dedicated biotech co-owned by GSK and Verily, an Alphabet
company.

Dr. Moncef served as a member of Moderna’s Board of Directors since 2017. He resigned in May 2020 after he was appointed by President Donald Trump to oversee the White House’s Operation Warp Speed Initiative. Moderna, Inc., is a clinical stage biotechnology company pioneering messenger RNA (mRNA) therapeutics and vaccines to create a new generation of transformative medicines for patients.

Moncef said he valued his time as a Board member and wished the company all the best; “I am honored to be asked by the Administration to take on this important responsibility. My entire professional career has been focused on development of therapies and vaccines to benefit many. I was inspired by Moderna’s vision to invest in developing a new class of medicines and vaccines based on messenger RNA. I have valued my time as a Board member and wish the Company the best as it continues its mission for patients.”

Noubar Afeyan, Co-Founder and Chairman of Moderna wished him well as he leaves the company; “I would like to thank Moncef for his critical insights and three years of service on the Moderna Board. “Moncef’s extensive vaccine and therapeutic development guidance were important as we continue to advance Moderna’s mRNA platform. We wish him well in this new role.”

Stéphane Bancel, Moderna’s Chief Executive Officer said; “I greatly appreciate Moncef’s contributions to the Moderna Board in his role of Chair of the Product Development Committee. His expertise and skills were invaluable as we approach advanced stages of development across our clinical programs. It has been a privilege to work with Moncef over the last three years.”

In March 2020 Morocco World News reported that Moncef denied in a statement to Moroccan French-language newspaper L’Economiste that he was part of a US government task force to find a vaccine for COVID-19.

He said that he was a part of Moderna’s research and development committee. The committee has received support from federal organizations to help fund the development of a COVID-19 vaccine

“Moderna, which has a very advanced technological platform, was able between January 13, date of reception of the DNA sequence of the virus, and March 25, to design the vaccine, and to produce it in such a way that it can be injected in humans. We will be sure of its protective potential in the coming months. By the end of the year, probably, we will know if it works and we will be able to produce it.”

President Trump ordered the creation of the Warp Speed program to try to speed the creation of a vaccine which some of his top public health advisers have repeatedly cautioned that an effective vaccine might not be ready for widespread distribution for 18 months, and perhaps even longer.

The Warp Speed program is intended to jump-start what is already a robust race to find a vaccine that involves several of the biggest pharmaceutical companies and a handful of government agencies whose mission is to help spur innovation among private companies at times of national crisis.

Moncef has an estimated net worth of $3 million.