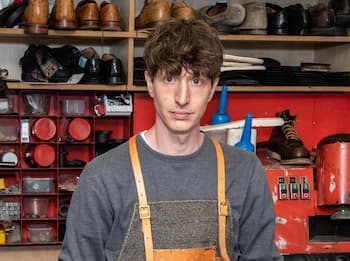 Dean Westmoreland is a cobbler from Yorkshire and appears on BBC’s reality show ‘The Repair Shop’ as an expert serving as a shoe restorer.  He is also the owner of Yorkshire Sole.

Dean has not revealed any information about his family. It si not clear whether he is married or not.

Westmoreland is a cobbler from Bradford, Yorkshire. He is the owner of Yorkshire Sole which aims to offer the finest workmanship. They specialize in the repair and recraft of Goodyear welted footwear from dress shoes such as Crockett & Jones, Trickers, Loake, Cheaney, Church, Oliver Sweeney, Barker, Jeffrey West, Sanders and more. Fashion and work boots such as Redwing, Wolverine, Thoroughgood and more.

He has been a cobbler for more than ten years, going part-time in 2010 to finish a degree in music. In 2016 he was named the J.Rendenbach Shoe Repairer of the Year.

He began his career working as a footwear specialist at JJB Sports before he became an apprentice shoemaker. He joined Timpson Limited in 2006 as a shoe manager and was a Young Shoe Repairer of The Year finalist. He later joined Kwik Service as a store manager. In 2015 he became a shoe restorer and apprentice maker at Peters Restorers and Shoemakers. He left in 206 to join Craggs Repairs limited as a cobbler and manager.

Dean appears on BBC’s reality show ‘The Repair Shop’ as an expert shoe restorer. During his first appearance, he restores running spikes worn by Ilkley Team GB trainer’s trailblazing grandmother Audrey Brown who took silver in the 1936 Olympics. After Birchfield Harriers died in 2005 he left Tom Wenham, his grandson, the running spikes to take care of them. Tom gave Dean the shoes to restore.

During an interview with The Yorkshire, he said; “I always like a challenge. I thought they were just going to fall to dust, but you could see they were well made, so I thought they could stand being repaired.”

He added that restoring the show was a challenge; “I was stumped by the old fibre construction. There were a few tricky bits, but everybody pitched in.”