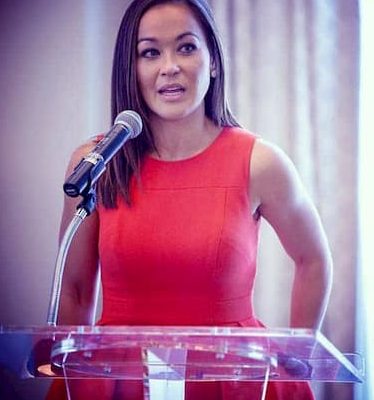 Eva Pilgrim is an American journalist serving as an ABC News correspondent and a weekend co-anchor for Good Morning America.

Pilgrim has a duo nationality; she is Korean and American.

She has a bachelor’s degree in Journalism from the University of South Carolina School of Journalism and Mass Communications in 2004. She was a member of the Carolina News team.

Pilgrim was born to a military family, her mother is a Korean while her father was American. The names of her parents are unknown although she posts pictures of her mother on Instagram. Her parents immigrated to the U.S. when she was young.

I’ve been her shadow since the beginning… copying her every move and outfit. So thankful for the amazing example she is always!!! Love you mom. Happy Mother’s Day ?

She is not married but is in a relationship although the name of her boyfriend is unknown. She however posts him on her Instagram page. She was previously in a relationship with Clayton Anderson, an Indiana singer.

Thankful. ? All the things. I love this season of #thanksgiving. Psalm 106:1 #gratitude

Eva was alleged to be a relationship with Micah Caskey, an American attorney and politician who was elected into South Carolina House of Representatives in 2016. The couple seems to have broken up, although they never confirmed the relationship, as Caskey proposed to his girlfriend, Erin Harris in 2018. Micah an

Pilgrim is an ABC News correspondent since 2016. She has covered stories such as the Charlottesville protests, Prince’s death, the hurricanes Matthew, Harvey, Irma, and Florence, the Amtrak derailment, the Sago Mine collapse, and more award-winning investigative reports. She has also contributed to a number of shows, including ABC World News Tonight with David Muir (2016-2017), Good Morning America (2016-2018), ABC News Nightline (2018), and Good Morning America Weekend Edition (2016-2018) among others.

She previously served as an anchor and reporter for 6ABC since 2012 until 2015 when she joined ABC News. She covered the Amtrak derailment and Pope Francis’ visit to Philadelphia and also did some investigative work.

She began her career in 2002 as a web producer at WIS-TV until 2004. She later joined WVVA in Bluefield (2004-2006) as a morning anchor and reporter. In 2006 she joined Fox Charlotte as a news reporter and anchor. She later joined WXIN-TV.

Her actual salary is unknown but according to some sources, ABC employee makes an average of $98k-$107k annually.