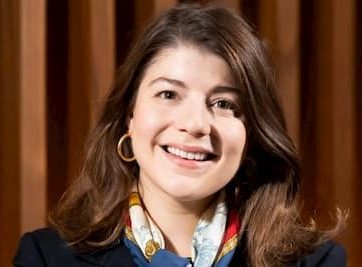 Clara Spera is a lawyer and the granddaughter of Ruth Bader Ginsburg, who served as an associate justice of the Supreme Court of the United States from 1993 until her death on September 18, 2020.  Clara alleges that her grandmother dictated a letter to her saying she does not want to be replaced on the Supreme Court until a new U.S. president is installed.

Clara is the daughter of Jane Carol Ginsburg and George T. Spera. Her mother, Jane is a professor at Columbia Law School, specializing in literary and artistic property law, and directs Columbia’s Kernochan Center for Law, Media and the Arts. According to her bio, she is an expert on intellectual property law, copyright law, legal methods and trademark law.

Her father George Spera, has a Juris Doctor from Harvard Law School and is a former compensation, governance and ERISA counsel at Shearman and Sterling.

She has a brother known as Paul Spera who is an actor. He has appeared on As Happy as Possible, On the Basis of Sex, Marianne (Kevin Jameson), La Guerre des As, Immortality among others.

In 2018 he married Francesca Sarah Toich and his grandmother Ginsburg officiated. The couple met in Paris in 2016 while performing as actors. The couple has a child known as Lucrezia Mary Spera.

Clara is married to Rory Boyd, the couple got married on March 10, 2018. The two met while at the University of Cambridge. Rory Boyd is an actor who has performed in regional theatre, including portraying Hamlet in Hamlet, Mordred in Camelot, and Romeo in Romeo and Juliet.

Spera is a lawyer licenced in New York. She worked as an intern in national security research at Brookings Institution.

While in law school she worked on a project to expand access to reproductive care to low-income women as a 2019 Equal Justice Works Fellow.

Clara is the granddaughter of Ruth Bader Ginsburg, an American jurist who served as an associate justice of the Supreme Court of the United States. She died on September 18, 2020 at the age of 87. Her death was announced by the Supreme Court citing the cause of her death as complications from metastatic cancer of the pancreas.

“Our nation has lost a justice of historic stature. We at the Supreme Court have lost a cherished colleague. Today we mourn but with confidence that future generations will remember Ruth Bader Ginsburg as we knew her, a tireless and resolute champion of justice.”

Clara revealed that days before her grandmother’s death she dictated a statement which said; “My most fervent wish is that I will not be replaced until a new president is installed.”