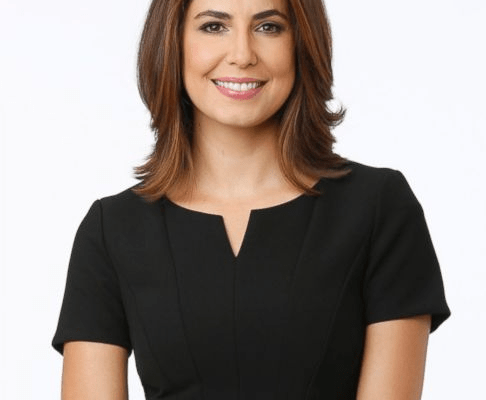 Cecilia Vega (Cecilia Marcelina Vega ) is an American journalist, currently serving as senior White House correspondent for ABC News. She joined the network in 2011 as a Los Angeles-based correspondent. Prior to her White House assignment, she had rotated with Tom Llamas as anchor of the weekend editions of ABC World News Tonight. Vega joined ABC News from KGO-TV in San Francisco. Before working in broadcast journalism, she wrote for the San Francisco Chronicle.

She was born in January 7, 1977 in San Francisco, California.

Her father was a drug addict(heroin addict) while her mothers’ identity is unknown.

She is married to California Highway Patrol officer Ricardo Jiménez and they tied the knot on 4 May 2008. She and her husband, Ricardo, live in Washington. Jimenez is an esteemed member of the force, as he received a medal for saving the life of a suicidal man in 2015.

So far she has no kid.

She is an Emmy award-winning ABC News anchor and the network’s Senior White House Correspondent. Her work can be seen on “Good Morning America,” “World News Tonight with David Muir,” “Nightline” and “20/20.”
During the 2016 presidential race, she led ABC’s coverage of Hillary Clinton’s campaign. She also covered Senator Bernie Sanders’ presidential bid while anchoring the Saturday edition of “World News Tonight.”
Vega made a name for herself In her coverage of President Trump, pressing the administration on everything from Russia to immigration.
She reported on the election and inauguration of President Barack Obama and interviewed everyone from Mexico’s President Enrique Peña Nieto to Sylvester Stallone.
Before joining ABC News, she was an Emmy-winning reporter for ABC’s KGO-TV in San Francisco. And prior to transitioning to broadcast news, she made her mark as an award-winning print reporter, most recently at The San Francisco Chronicle.

Her salary hasn’t been disclosed to the public.