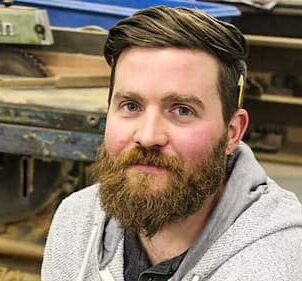 Bruce Kenneth Faulseit is a furniture designer, carpenter and television personality. He is a regular expert on the BBC 1 television show ‘Money For Nothing’, Channel’s 4 ‘Mend It For Money’ and ‘The Great Garden Revolution’.

He is in his 40’s but his actual age is unknown.

He is an American and British national. He hails from New Jersey but now residing in West Yorkshire, England.

Bruce’s marital status is unknown as he has kept that part of his life private.

How Did Bruce Kenneth Lose His Hand

According to his website, he was born without a right hand. “I was born missing my right hand but that has not stopped me or slowed me down.” According to a post on his Instagram page, the left hand also had to undergo a few surgeries to separate fingers and restore movement.

According to NJ Pen, he wanted to make a prosthetic arm which he began fabricating from cut piece of copper pipe at The Factory in Collingswood. He envisioned adding a universal, quick-release fitting to its wrist that would allow him to switch among a number of specialized woodworking attachments in the shop. He however didn’t have the technical expertise and had to stop.

The project was however revived, when Peter Brown, another woodworker met artist Kaitlyn Debiasse at another maker space. Brown was walking Debiasse through some 3-D modeling software that she wanted to use to make printable prosthetic limbs. As they talked Brown thought of Bruce as a perfect candidate.

Bruce had been looking for assistance from other makers who knew how to operate the computer-guided machining tools that could help him complete the fittings for his arm.

Brown said; “I got the idea of what he wanted to do, and then I figured out who I needed to talk to to get it done. People just started coming out and trying to help out with it.”

Christine Zapata, an industrial designer, made a leather strap for the prosthetic to attach to Faulseit’s upper arm. Matt Watson, NextFab Metals Process Manager, made the bayonet fitting for the prosthetic, which housed the universal adapter Faulseit and Brown designed with 3D modeling software.

He is a furniture designer & maker and the owner of ‘Bruce Kenneth Designs’. According to his website he “creates bespoke pieces for both private & commercial clients as well as his own range of tables, chairs, side tables designed for Knightsbridge Furniture which are influenced by mid-century design.”

Bruce Faulseit Money For Nothing

Bruce is one of the Artisans on BBC 1’s Money For Nothing. It is a restoration show where disposed items are restored by the artisans and then sold for a profit. The profit made is returned to the individual(s) who disposed of the item originally.

Bruce Kenneth Mend It For Money

Kenneth is one of the experts on ‘Mend It For Money’. In the show, the experts compete against each other to give objects a new lease of life with high-end restorations to sell them on for big profits.

Faulseit is one of the presenters of ‘The Great Garden Revolution’ alongside designer Joel Bird and ecological gardener Poppy Okotcha.

In the four-part series, the trio uses their expertise to transform different gardens across the UK. They also give expert advice and tips along the way which viewers can use in their own garden.

Fintan Maguire, co-executive producer said: “After a year of locking down and staying home we are all more appreciative than ever of our outdoor spaces. So, it’s a great time for a gardening revolution and a new series that is full of practical content that we can all do. With a makeover at the heart of each show, our exciting expert line-up will be inspiring us with creative and sustainable ideas for both the beginner and the more experienced gardener.”