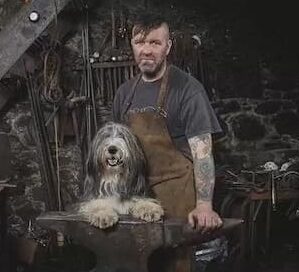 Kev Paxton is a Scottish Metalwork Artist based in Edinburgh. He is the owner of KL Paxton Blacksmith and appears on BBC’s Money for Nothing. He began his work in the Smiddy as an apprentice in 1989 and mastered his trade over a period of 10 years and in 1999 he set up his own business, K Paxton Blacksmith.

He has managed to keep his family out of the limelight.

He has not publicly talked about his marital status. It is unclear whether he is married or not. He however posts pictures on his Facebook with a female friend. It is not clear whether they are in a relationship or they are just co-workers.

Paxton is a Scottish architectural metalwork artist. He trained as an apprentice with a local blacksmith who was the chairman of the British Artists’ Blacksmith Association in 1989. He said in an interview that his work evolved and after 16 years he decided to go on his own offering more unusual domestic work as well as art.

“The art really started to take off when I did a display at the Royal Highland Show. I am their blacksmith and they encouraged me to take a trade stand. The response we got from the public was unbelievable, it was very encouraging.”

He said that his inspiration comes from Mother Nature and is also inspired by ‘wee stories, such as why the thistle became the flower of Scotland. We created the largest thistle ever made, which was displayed at the Highland Show and is going to live in Gretna Green as a tourist attraction. We’ve got plans for an even bigger one. The idea of our work is to make people smile.’

Most of his work is for private collections but is also keen to do more public art. He also lends his sculptures out.

He has a shop known as ArtFe located near Ratho, Edinburgh. They use centuries-old blacksmithing techniques to create beautiful bespoke sculptures for private buyers, commercial businesses and more recently public commissions. The sculptures are primarily made from mild steel, though occasionally other mediums such as recycled plough metal, wood and glass are incorporated. Modern techniques like galvanising and acid washing create individual and enduring finishes.

Kev together with his team of five has creates unique works of art in his Edinburgh workshop. They created a sculpture of local Scottish Olympic legend, Scott Brash for Scott’s home town of Peebles, complete with Olympic mount, Hello Sanctos. The entire sculpture was hand-crafted from horseshoes – including 4 from Hello Sanctos himself.

“Scott Brash comes from Peebles, and when The Bonnie Peebles committee approached us to create a sculpture for the community, we thought it would be a terrific idea to create our first piece of public art.

We met them we started to develop the idea further, and with Scott Brash being a local hero and all, we decided that a sculpture of him on his Olympic horse, Hello Sanctos, would be perfect.”

You can check more of his work on the company’s website.

Kev Paxton Money for Nothing

Kev appears on BBC’s show Money for Nothing as a blacksmith. In the show, Sarah Moore, Jacqui Joseph and JJ Chalmers hunt down discarded items at recycling centres before passing them on to some of the UK’s best makers and menders – including Kev – before they are reworked into exquisite art pieces and sold for profit.