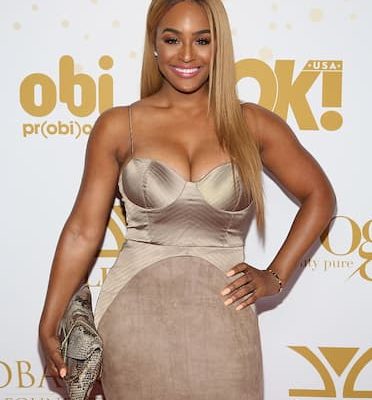 Brandi Maxiell is the wife of former Detroit Pistons star Jason Maxiell and a reality star who appeared on the Basketball Wives: LA. She has been hospitalized with a “severe case of COVID-19,” according to her sister. She runs a cosmetic business Brandi Maxiell Cosmetics and operates a beauty salon in Carrolton, Texas.

Brandi stands at a height of 5 feet 7 inches tall.

Brandi is the wife of Jason Maxiell, the couple got married in 2010. He is a former professional basketball player best known for his tenure with the Detroit Pistons from 2005 to 2013. He retired on August 4, 2017 after playing professionally in the NBA, China, and Turkey.

In September 2018 while being featured on an episode of Iyanla: Fix my Life on OWN, the couple explained that they were high school sweethearts. Jason also revealed to Brandi that he cheated on her over 50 times during their marriage.

Happy Father’s Day Big Guy!!! You are the most patient, kind, loving man I know! We make a great team in this parent thing lol! We love you ? and @babyjasonmaxiell is so blessed to have you as his daddy!

Maxiell was a cast member of Basketball Wives: LA during the show’s third season in 2014 until it was canceled in 2016. She has also appeared on the TV shows ‘The Arsenio Hall Show’ and ‘Access Hollywood Live,’ and on the TV Series documentary ‘E! True Hollywood Story’.

She is also an entrepreneur who runs a cosmetic business Brandi Maxiell Cosmetics and operates a beauty salon in Carrolton, Texas.

Brandi has been hospitalized on September 24, 2020 with a severe case of COVID-19 after having trouble breathing.  Her sister, Jayde told The Shade Room in a statement, “My sister has been diagnosed with a severe case of COVID-19 and was hospitalized Thursday night after having trouble breathing. We would like to ask everyone to please keep her in your prayers as she continues to fight through this. We love you all and please stay safe!”

Maxiell was diagnosed with ovarian cancer in 2007 at the age of 24 but after surgery and treatment, the cancer is in remission. During an interview with the National Ovarian Cancer Coalition’s website for Ovarian Cancer Awareness Month when asked about whether she noticed any symptoms she said;

“Back in 2007, I had all the classic symptoms of ovarian cancer – back pain, bloating, weight gain, abdominal pain, feeling full quickly after eating a couple of bites of food as well as the need to urinate urgently or often. Initially, I thought the weight gain was due to my love of soul food, since I’m a Texan. I knew I wasn’t pregnant. Really, the big tell-tale sign for me that something was wrong was the hard knots I could feel in my abdomen area.”

She also added that due to lack of family history of ovarian cancer, the symptoms were initially dismissed and the doctors gave her medicine for back pain because she was young.

“My family is fairly healthy. And because of my family history, my symptoms were initally dismissed by the doctor. Instead, he gave me medicine for back pain because I was this young, Black woman in my twenties with no family history of any major disease. Ovarian cancer really is “a silent killer” because the symptoms are so general, any woman could have them during a menstrual period. After my surgery, my doctors told me that I had one of the worst cases of ovarian cancer they had seen.”

This year on Halloween in 2018 is a day I will never ever forget!!! My baby couldn’t wait to be his super hero. He had to wait 8 long months from the day he saw the movie to become his superhero. I remember this day in particular because after trick or treating my baby cried for 2 reasons…1 mainly being he didn’t want to take off his costume and screamed every quote in the movie why ? and 2 being that he was dang near frostbitten because be refuse to wear a coat because he just wanted to show his whole costume. I mean my baby screamed hollering when we walked in and we sat right by the fireplace for an hour?. Chadwick I thank you for being such an amazing role model and one of the best superheroes to all kids but most importantly the brown/black babies and giving them a superhero that looks like them. You definitely touched a lot of people’s lives. Rest in peace Black Panther ? #fuckcancer #wakandaforever #blackpanther