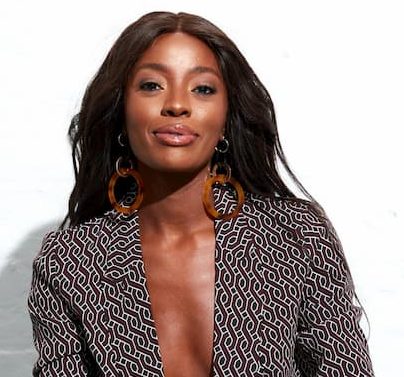 AJ Odudu is a British presenter and a contributing editor for Grazia UK. She will be hosting he new companion show for the UK’s Married at First Sight spin off show on E4, Married at First Sight: After. She co-hosted C4’s The Big Breakfast with Mo Gilligan, Channel’s 5 Big Brother’s Bit on the Side and was also the back-stage host of ITV’s The Voice & The Voice Kids among others.

Odudu’s full name is Onatejiro Odudu but she goes with the shortened version AJ Odudu.

She was born on February 12, 1988 in Blackburn, Lancashire, England.

Odudu stands at a height of 5 feet 7 inches tall.

AJ was born to Nigerian parents Florence and James Odudu. Her mother was a cleaner at a grammar school, and her father was a bus conductor.  Her mother moved from Nigeria to Blackburn in the 1970s to marry her dad as part of an arranged marriage. During an interview with Mail Online in 2018 she said; Because they are Nigerian, they had an arranged marriage years ago, they had eight children and they literally can’t imagine being 30 and not having children.”

AJ has seven siblings: two sisters and five brothers. She has not revealed the names of her siblings except her oldest sister who is known as Abigail who is an engineer. Her oldest brother is a lecturer at Cambridge University, another brother is a kidney specialist, while another sister is training to be a teacher.

In 2020 she told MailOnline that she was single. She had hoped to meet ‘the one’ but due to lockdown it was impossible.

‘I have been all alone, I didn’t move back in with family, I didn’t see anyone. I took it so seriously for months, so to come out of it still sane, I was really proud of myself! It’s so funny because I thought “right this is the time I’m going to go on a date!” and then just as I was getting out there, lockdown two happened and now I’m just focused on work. I do not mix business with pleasure. 2020 is not the year for my love life sadly.’

She has previously embarked on a quest for love on TV shows, Manhunting With My Mum in 2018, and Celebrity First Dates Hotel in 2019.

Odudu began her career as a reporter for BBC Blast based at Radio Lancashire. In 2009 she had her first presenting role on the BBC Two series The Almost Perfect Guide to Life and on The 5:19 Show, an online show on the BBC website, having previously served as the latter’s ‘raving reporter’.

According to her website, she is a qualified personal trainer and sports nutritionist. Her passion for health and fitness has led her to present snowboarding and music show Freeze Festival, surf and music show, Roxy Pro as well as, fronting surf and skateboard competition, Boardmasters, productions all for Channel 4.

Odudu is the backstage reporter for The Voice UK since December 2018. At the time she said; “I’m so happy that I am joining The Voice UK family as their Backstage Reporter”, AJ said. “Teaming up with one of my fave host’s Emma Willis and iconic coaches Sir Tom Jones, Jennifer Hudson,

I thoroughly love the show and will work with abundant enthusiasm, whilst bringing a healthy dollop of northern charm. I might even kiss a coach. Who knows?! Get ready for music and mayhem!”

AJ appears alongside fellow guest Richard Osman and host Jo Brand on Channel 4’s Bake Off: An Extra Slice. In the spin-off show, they discuss events that unfolded in the Tuesday episode of Great British Bake Off. She looks back at the contestants’ baking efforts and shows viewers’ unseen clips from the main show.

Odudu is set to host a reality show ‘Don’t Rock The Boat’ alongside Freddie Flintoff which will air on ITV. The contestants will face the waves and wind of the sea legs and the daunting cliffs and gorges of Britain’s spectacular shoreline.

Seriously I’m BUZZING! Woke up in the sky to a wattsapp from my mates sending me this! . When you work hard the reward is always sweet! 2020 ain’t over. Know that. ??? . #DontRockTheBoat coming soon to primetime ITV baby! ???✨

In 2019 she was a contestant on Celebrity SAS: Who Dares Wins in aid of charity Stand Up To Cancer. She made to the finals alongside Olympian Victoria Pendleton, TV presenter Jeff Brazier and ex-footballer Wayne Bridge, who went on to win.

She said it was the most positive experience of her entire life although she struggled for the first three months after it ended.

“It was really uplifting, but the interrogation stage really did my nut in. It’s called ‘escape and evasion’ on the show, and they put you in a room and they blindfold you with a bag over your head and you have to stay in these stress positions, and you hear all of these distressing noises for 13 consecutive hours. That honestly gives me nightmares. “So three months after I was affected quite negatively and I couldn’t sleep.

However, after coming out of all of that I feel really strong and really proud of myself and also safe in the knowledge that anything I put my mind to I can absolutely do, and I know that I do well under pressure. Moving forward I feel great and I’d actually recommend it to anyone who had the opportunity to do the show to just do it.”

I’m scared of heights yet I abseiled down the face of a cliff facing forwards. I’m fearful of deep water yet threw myself out of a helicopter into the sea. I even carried an Olympic, European and Commonwealth champion up a mountain. Everything is impossible, until it’s done ??? . Thanks for the experience of a lifetime @sas_whodareswins ✨ #saswhodareswins

On June 24, 2020 in a Vogue article, AJ recounted racism she faced while growing up and how it has continued to affect her life – and how to root it out for good.

“As a Black woman born to Nigerian parents in the UK, the events of recent weeks have been traumatic on a personal level, forcing me to reflect on my own experiences, and dragging up dark memories I had buried.

Memories like: being told by a stranger in the supermarket as a six-year-old to wash my face; the time the friend I’d made at primary school’s parents set their dog on me; the time my white boyfriend said his pillow looked like it had been defecated on where my make-up had rubbed off; the time I walked into an expensive shop and extra security was called to “keep an eye on the Black girl”; the time my friend’s dad came to our flat and described the “pack of darkies” he’d driven past to get there; the countless times I’ve been told to go back to where I came from; or the time a concerned resident called the police on my 10-year-old brother, who was then illegally detained for hours without his parents’ knowledge. His crime? Doing a paper round in a posh white area. (How ironic that my brother now works as a senior NHS doctor.) This is before taking into account the times I’ve been physically beaten, spat at, and called disgraceful names.”

Odudu is one of the contestants on Strictly Come Dancing 2021. She is paired with a professional partner, Kai Widdrington.

“I am beyond chuffed that I am going to be on this year’s Strictly Come Dancing and I’m so glad I can finally tell my mum. Her face will be a picture, she’s going to be over the moon! I absolutely love the show and am fully committed to making the most of every second of the Strictly experience. Bring it on!”

AJ and Kai are partners on BBC’s Strickly Come Dancing. They are however rumored to be dating after AJ took him to her hometown.

In a video posted on her social media se said; “I’ve bought Kai to Blackburn. You’ve made it, Kai. We’re at Ewood Park with some of my family. This is where I used to work, so it’s brilliant. I’m having a great time, are you having a great time?”

This comes after AJ liked a cryptic post hinting at the pair’s romance.“Flipping love @AJOdudu what a top girl! Such a great attitude & lovely personality. I hope she is getting it on with Kai cos she deserves it! #StrictlyComeDancing #Strictly #Strictlycatchup.”

She has an estimated net worth of $1.7 million.

Waking up in the sky & sunbathing in bed till further notice @shangrilalondon ?☁️ #Roomwithaview ✨?